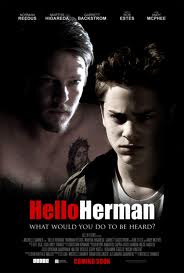 The social implications of the daring film "Hello Herman" cannot be ignored.  "Hello Herman" looked at school shootings in a fictional format.  However, within that fiction, rang the bell of truth.  "Hello Herman" dissected the violence of school shootings and then used a microscope to look more closely.  Michelle Danner, the film's director, gave her audience questions to ponder such as, what can and should be done to make schools safer, why do some children go over the edge and go on shooting rampages,  and who are these children?  Originally a play, Michelle Danner and playwright John Buffalo Mailer, worked to bring this to the silver screen.  With revisions and updates, the movie brought us up close and personal with Herman Howards, the 16 year old who was responsible for a mass shooting in a high school. 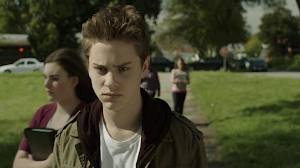 The movie began with Herman on his way to school.  What a sweet and handsome young teen.  He looked like one of my daughter's friends.  That typical look quickly was erased when he entered the school's gymnasium and took a gun from his bag and used it without hesitation on several scared and shocked teens.  During the ensuing chaos, Herman, on his camera, requested that he be interviewed by none other than blogger Lax Morales.  When Lax accepted the invitation to interview the now incarcerated killer, the movie delved more deeply into the why Herman did what he did. 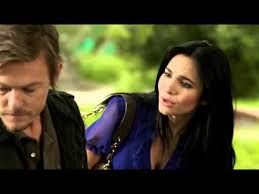 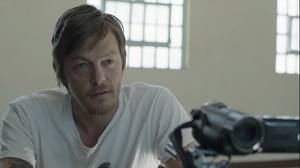 Both Lax and Herman had skeletons in their closets.  Their parallel stories were revealed, however these stories eventually diverged.  We learned more about each of the characters and their past; explaining their actions.  Through flashbacks in Lax's life, we saw the love of his life fall apart and why that happened.  We saw what hatred and racism can do to people.  As Lax wrestled with his ethics and his past, he pulled you in to his character.  You were constantly wondering what his past truly entailed and whether or not this was a person you should root for.  The media in the movie constantly questioned the his ethics, but the so called "credible" media wasn't an innocent bystander in the circus that ensued.

Herman's life was also shown in bits and pieces in flashbacks.  We watched as he calculated the death of each student and teacher while he narrated what he was thinking while he did it.  The film also attempted to discover Herman's background to explain his actions.  This seemingly normal kid was actually a mess on the inside.  Herman reminisced about his father leaving, his sister's death, his mother not being there for him and his overall loneliness.  Bullying, divorce, lack of parent involvement, violent video games, and the internet usage were all aspects of possible forces driving Herman to do what he did. 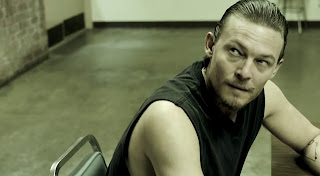 Garrett Backstrom, a newcomer to the Hollywood scene, played Herman to a "t."  His skill in portraying this disturbed child seemed uncannily accurate.  He jumped back and forth with believable skill from disturbed killer to tortured teen.  This is an actor that I think we will see more of in the future.  Norman Reedus played the blogger/podcaster who was given an opportunity of a lifetime...interview the shooter.  Reedus, with his grungy appearance, was the perfect choice for podcaster and previous "redneck."

While this was just a movie, the reality of it was so topical.  Since 1992 there have been 387 school shootings.  Of course, cancer, heart disease, and car accidents have killed many more people each year.  However, just 1 child dying at school because of a shooting or other violence is one too many.  Especially if it is your child.  We send our kids to school trusting they will be safe.  That doesn't seem to be the case anymore.  In December of 2012, the shooting in Newtown, CT showed just how safe our children are.  There have been 11 more shootings just this year.  "Hello Herman" brings all of this right to the forefront where we cannot ignore it.  This play was written 13 years ago in response to Columbine.  Ms. Danner, a mom herself, felt the need to make this movie.  Without discussing the problem, it will continue.  Ms. Danner wanted people to discuss and find ways to decrease the violence. 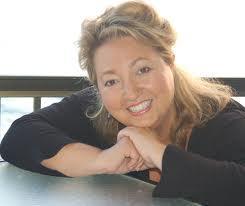 Bullying was a topic Ms. Danner was familiar with on a first hand basis.  With her family, Ms. Danner moved to France as a child and was not exactly the popular kid.  She and her sister were bullied.  She had frogs placed in her backpack to name one harassing action.  Even though she wasn't accepted at this school, Ms. Danner shared that she would always stick up for anyone getting picked on or bullied.  There was, however, one instance that stood out in her mind about bullying.  When her sister was being picked on, Ms. Danner "read that girl the riot act."  She and her sister were surrounded by about 40 other students, booing them.  But Ms. Danner did not back down.  After that, Ms. Danner took to writing poetry and plays.  She adapted an Alexander Dumas book for the stage and began casting those same bullies in parts.  With the success of the plays, the bullying stopped.  Ms. Danner had the ability to stand up for herself and others and turn the negative into a positive.  Not everyone has the inner strength to do so.  There are kids out there with many strikes against them.  Talking about how to identify these children and help them before they get to the point of lashing out was a goal Ms. Danner wanted to achieve with "Hello Herman."

Gun control, mental illness, the video gaming industry, and parenting, were all issues this film brought up.  Whether or not to make this film to begin with was also a topic of discussion.  One may get worried that this film will inspire a child to mimic it.  That brought the question of does art imitate life or vice versa?  With the alarmingly statistical increase of violence, bullying, and cyber bullying, Ms. Danner was more than prepared to answer any questions.  As she stated, "I've signed it...no apologies."  She is ready for the dialogue to begin.  This film was shown to a town hall meeting previously and a heated conversation ensued.  Conversation was the reaction she wanted.  She felt that with the increase in internet use, phones, texting, YouTube, etc.,  we have all become even more disconnected.  Perhaps this intense, thought provoking, and unnerving film will open the floodgates to become more connected.  Maybe we will find some path for a solution to end violence and keep children safe in school.

"Hello Herman" opens this Friday, June 7 in limited cities.  You can also see this film on demand on June 7th.  In the coming weeks, "Hello Herman" will have a wider release.  Please be aware that although this is a topical film, it is very harsh and disturbingly intense.  I would not recommend it to younger children.  I think it would be perfect for high schoolers to watch with their parents.  After I saw this film, my daughter and I had a wonderful conversation about all the different topics "Hello Herman" covered.  Ms. Danner has accomplished her goal of starting a conversation...at least at the Powell house.