WE'RE THE MILLERS: A HIGH LIFE by Pamela Powell 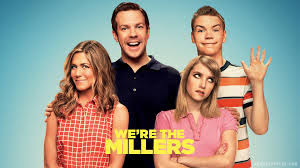 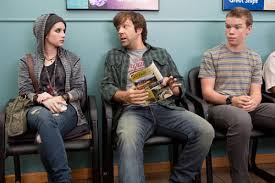 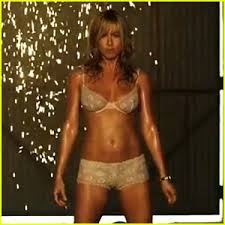 We’re the Millers,” starring Jennifer Aniston and Jason Sudeikis, opens to positive reviews already.  This summer-time flick is about drugs, deceit, and family.  If that seems an odd combination of ideas, you’re right.  Another noteworthy point is that this is Aniston’s second time playing a “naughty girl.”  With her first role as the demented dentist in “Horrible Bosses,” this paved the way for her current role as a stripper in “We’re the Millers.”  Knowing that the film is directed by Rawson Marshall Thurber you might find some similarities to “Dodgeball: A True Underdog Story” from 2004. Can the writing, acting, and directing pull this strange film together to entertain the audience?  Read on to find out. 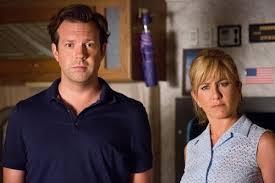 David Clark (Sudeikis) is a small-time drug dealer peddling pot.  When he loses his merchandise and cash to thugs, he must somehow repay his boss, Brad Gurdlinger (Ed Helms).  The payback plan is to have David smuggle a “smidge” of marijuana back into the States.  David knows he can’t pull this off without a little help.  His plan involves creating a wholesome family to distract officials in order to complete the task.  His new “family” is anything but wholesome and they must now deal with David’s whacky plan and decisions.

“We’re the Millers” starts off slowly with the first third of the film trying too hard to be funny.  Humor is derived from vulgarity and raunchiness and finds itself falling a little flat.  When the family of four is finally off on their lucrative adventure, the film picks up its pace and finds its humor through more creative writing and utilizing the situations and characters at hand.  While the raunchiness is still there, it’s not the main draw for laughs. The situations the family finds themselves in are totally ridiculous, but the film never takes itself too seriously.  It capitalizes on this awareness and runs with it.  For example, there is an outright ripping off of “Flashdance,” and it works!  The film is light, raunchy, silly, and at times very, very funny. 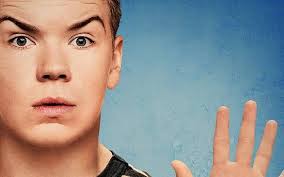 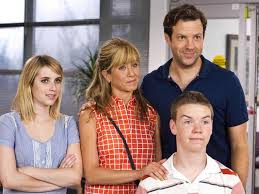 “We’re the Millers” centers its story around Sudeikis’ character David which gives him the opportunity to have the most character development and laughs.  Even with the understanding that this is a lighthearted comedy, similar to “Dodgeball,” it still has a  few underlying plots.  David is shallow and self-serving and this aspect of his personality changes with the help of his new “family.” Although this role is not a stretch or challenge for Sudeikis, he fits the bill perfectly.  Aniston is gorgeous and seems to totally enjoy her part as a stripper.  As she transforms into the mom next door, she still looks gorgeous even wearing a lovely eyelet sleeveless shirt, frumpy capris, and “sensible shoes.”  The raunchiness shows up again as she “entertains” her audience with her previous working skills.  Emma Roberts always shines and  her performance in this film is no exception.  But the standout performer is Will Poulter who nails his role as the sweet, nerdy brother with a big heart.  His facial expressions and physical humor brings the audience to tears of laughter. He is off-kilter and goofy in just the right way and seems to take chances that pay off wonderfully.  Throwing Nick Offerman and  Kathryn Hahn into the mix with their off-beat and over the top characters continued the hilarious expedition. 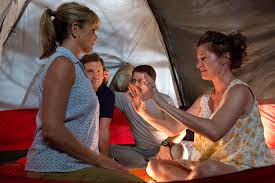 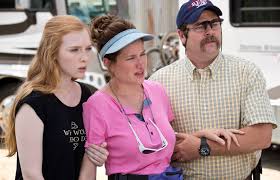 “We’re the Millers” is a quirky, fun, and raunchy summer film.  Although its slow start is worrisome, it quickly regains momentum and succeeds in entertaining. The jokes, sometimes crude, do make you laugh throughout most of the film.  The overall story is silly, but somehow it works in pulling opposing concepts together. This film is most definitely geared toward the younger generation, but if you are open to a bit of off-color humor and raunchiness, you will enjoy this summer trip of a film.