EXIT, PURSUED BY A BEAR By Pamela Powell 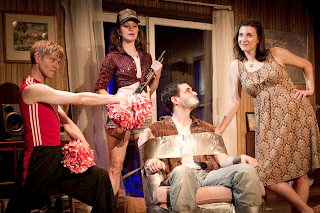 Theatre Seven of Chicago presented EXIT, PURSUED BY A BEAR on Tuesday, June 7th.  Written by Lauren Gunderson and directed by Cassy Sanders, this production featured a small ensemble of actors, but the performance was nothing shy of enormous!  The main role of Nan Carter played by Tracey Kaplan, was supported by her fellow actors Ryan Hallahan (Kyle Carter, the husband), Ryan Lanning (her gay best friend and cheerleader Simon Beaufort) and Elizabeth Hope Williams (her newly found best girl friend and stripper extraordinaire Sweetheart aka Peaches).  Described as a revenge comedy, Nan has duct taped her husband to a swivel chair reinacting her not-so-happy marriage with the help of her friends Sweetheart and Simon.  I had to see this play that, in the synopsis, stated that we would watch “the simple joy of tying a dickhead to the living room chair.”  Sounds like a perfect Girls’ Night Out! 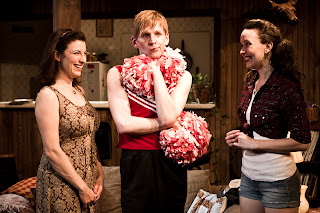 As I entered the theater, I took in the ambiance of the set before me.  I couldn’t help but notice the man duct taped to the tacky swivel chair apparently passed out.  OK.  You’ve got MY attention! EXIT took place in rural (super-rural) Georgia.  The house set could have been out of anywhere in the back hills of the US, but the perfect southern accents hammered home the locale.  Introductions to each character took place in very creative ways so the audience understood each person’s relationship and perspective.  Poor Nan has been not just verbally abused, but physically abused all of her 7 years of married life.  Nan has knocked out her husband with a frying pan and then duct taped him to the chair.  This was completely planned out as she and her friends have written out a script to act out the last 7 years of Nan and Kyle’s life together.  Their audience?  The captive Kyle.  Sweetheart, the stripper and wannabe Shakespearean actress, and Simon, her best friend and gay cheerleader, have memorized their parts and with all the subtlety of a sledgehammer, acted out Kyle’s behavior.  How is it possible to take such a serious and sad topic like spousal abuse, address the issues tastefully, and still make it really funny?  EXIT did just that.  That’s not to say there weren’t some serious parts to it.  There definitely were.  But not enough to drag you down while watching it.  Just enough to help you learn and understand. 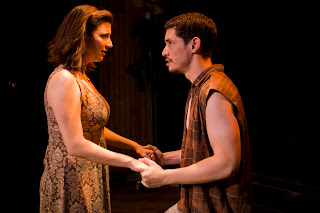 The humor with the dialect was somewhat campy and at times, over-the-top, but not in a bad way!  I found myself laughing out loud, much to the chagrin of the gentleman next to me.  This well-written play took you through various highlights and lowlights, if you will, of Nan and Kyle’s marriage.  Through these snippets, you gained understanding into why so many women stay in marriages like this.  It’s tough to leave.  It takes courage and support which is where her two quirky friends came into play.  They both loved Nan and wanted desperately for her to leave.  These two definitely had their own issues, but they did not let it overshadow their friend’s immediate needs.
With the common thread of Jimmy Carter quotes sewn throughout the entire comedy, Nan, Kyle, Sweetheart, and Simon all learned life lessons, bless their hearts.  There are many lines that are absolute gems, but I won’t tell you as I want you to go see this and hear them for yourself.  A play that (please read with a southern dialect) “I ain’t never in all my born put-togethers” (translation:  I have never in my life) seen the successful combination of humor and depth about a very serious issue.  Let’s face it, we all know someone who is in a marriage that may be verbally and/or physically abusive.  Unfortunately, it’s more common than we want to admit.  Get some friends together and see this well-written, well-directed, well-acted, and well-done show!  You’ll laugh and then you’ll understand. 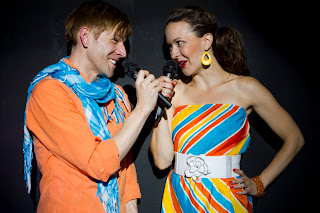