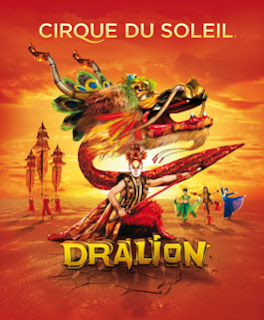 I had the pleasure of attending my second Cirque Du Soleil show last night at the United Center.  My first one was "O" in Las Vegas many years ago.  That show made an lasting impression and this show was just as spectacular.  As I entered Section 105, which is my friend's season Hawk's seat section, I saw the United Center transformed into a Circus!  The capabilities to accommodate such diversity in performances has always boggled my mind about the United Center.  We walked into a vaudeville type of performance taking place on and off the stage and throughout the audience.  Three "clowns," not your typical clowns, were entertaining every person in the audience and the show hadn't even truly started.  This was the warm-up.  It was a cute, old-fashioned kind of fun as they dragged audience members (yes, literally!) up onto the stage to help them with their gig.  I was laughing out loud from the very beginning!

Dralion's inspiration comes from Eastern philosophy of the complementary existence between nature and humans.  The costuming represented the elements of nature such as water and air, and fire and earth.  Dralion literally is the blending of East and West:  the dragon and the lion.  The lights dimmed and the scenery began to appear with performers appearing to be "stuck" onto a three story wall.  Beautiful, graceful dancers in brightly colored unique outfits filled the stage.  Throughout the first "act," I have never been so visually captivated and auditorily transfixed as I was during this performance.  There was so much going on that I don't think I blinked more than once!  I didn't want to miss a thing!  Between each segment, the "clowns" came out to entertain the audience.  Although I couldn't understand the language they were speaking (was it Italian? French? Maybe a combination of both? Or perhaps it was truly just jibberish!), it didn't matter; it just added to the hilarity!  The physical comedy was spectacular.  From the Juggling act to the Trampoline act, I was left with my jaw dropped and "wow's" involuntarily being emitted from my mouth.  These performers were spectacularly talented and strong!  They were gymnasts and dancers of Olympic calibre.  Their bodies were perfectly balanced.  Amazing, truly amazing!

My favorite performers were the Trampoline Artists.  Spiderman could learn a thing or two from them! Flipping from side to side (picture the right side of the hockey rink to the left side!) and up to a ledge in unison or complementary to the other 4 jumping and flipping and "sticking" to the wall at the same time was mind-boggling!  The precision timing in all of the performances was astonishing and so important!  One wrong move, one second off, and there could have been disastrous results.  Although my favorite was the Trampoline Artists, the rope jumpers were incredible as well.  Picture Triple Dutch doing acrobatics! And the juggler!  And the Crossed Wheel!  Oh, then there was the Aerial artists!  Honestly, and this is Reel Honest Reviews, there wasn't a dull moment!

If you can catch this here in Chicago, please do!  You won't be disappointed!  This was a jaw-dropping and mind-blowing experience!  It's here in Chicago just through Sunday, July 1 at the United Center.  This performance will entertain any and all age groups, both male and female.  In fact, I "interviewed" a few kids after the show who were 7 years old.  They all said they loved it and their favorite part was the "clowns!"  Their parents said they were captivated the entire show...as was I!

For tickets, go to www.cirquedusoleil.com/dralion.
Posted by Unknown at 7:03 AM