PATANG (THE KITE) by Pamela Powell 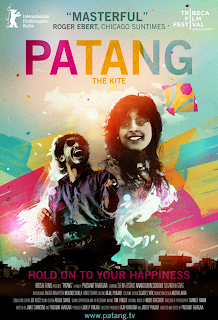 PATANG THE KITE
After having made an appearance at the Tribeca Film Festival in 2011, PATANG THE KITE is now finally soaring into major cities’ theaters. In Chicago, it will premiere on June 15, 2012.
PATANG THE KITE takes place in the city of Ahmedabad, India where the country’s largest kite festival occurs.   What, you might ask, could you have in common with an Indian story that would make you want to view this film?  The answer is Life.  This is a story that easily crosses all cultural boundaries and pulls us all together in the way that we deal with family; both extended and immediate.
PATANG THE KITE tells the story of a successful Delhi businessman who returns to his childhood home with his teenage daughter and experiences how his family members have changed or remained the same and how that impacts who he is as a father, son, and uncle.  His timing of his return coincides with a childhood favorite festival of the largest Kite Festival in India. 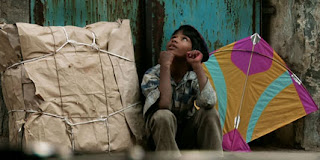 This is a complicated movie, but in the best way.  It is a multi-level look at relationships and people’s emotions and baggage.  Let’s face it, we all see things at a variety of levels and we all have baggage and this affects how we interact with people; especially those who loaded our bags from the beginning.  We are introduced to the main characters of Jayesh and Priya who return to Ahmedabad who obviously have not been home for many years.  We watch as their history  with Chakku, Jayesh’s nephew, Jayesh’s mother and his grandmother unfolds. I loved watching the father-daughter relationship and trying to figure out what happened to the mother. The father’s homecoming is like the return of the Prodigal Son and not everyone likes that.  There is definitely some left-over anger and jealously that has not been resolved and the viewer is left to figure it all out.  Hamid, a street boy who is in charge of delivering specially made kites to the family, captures your heart with his natural sweetness accompanied by a look that is too wise for his age.  Truly natural performances by each and every actor.  Credit must go not only to the actors but the director as well.  I had the feeling that I was a fly on the wall watching this family interact. What an accomplishment.  I certainly didn’t feel that I was watching a typical Hollywood movie filmed on a set.
Interestingly, this movie addresses how the traditions and thoughts of the older generation of Indians and the newer generations have to somehow coincide.  In PATANG, you see how it is difficult for the older generation to accept change and how the son and granddaughter are the change.  Somehow, they must all figure out a way to coexist.  The recognition and unwillingness to see these differences, in some instances, can be yet another stumbling block in maintaining relationships.  All of this you are able to deduce not just from dialogue, but from phenomenal non-verbal acting.
This is a beautiful movie.  The filming technique, the background even when you are viewing a poor area, and the people are all gorgeous.  It feels real.  I continually had to remind myself that this is not a documentary and these are actors.  As it turns out, many of these actors, especially the children, didn’t have lines to memorize, they just acted like, get this, children.  Perfect.  It works.  The situations are real.  The Kite Festival of Ahmedabad reminds me of my hometown’s 4th of July Celebration all based on a history and tradition of many years.  The story unfolds before you, but it doesn’t spell things out for you.  You are captured into each character’s life and try to figure out their thoughts, feelings, and the why’s of those thoughts and feelings while viewing their expressions.  This family is no perfect family, but in my experience, we are all from various degrees of dysfunctional families.  Again, this feels so real.

Each character develops over the 2 day period and the pieces of the puzzle come together in a comforting and beautiful way.  Coming home to deal with things you left behind isn’t always a good thing, but it is a necessary thing as we see in PATANG THE KITE.  This movie is about family; the good and the bad.  Beautifully shot, realistic in every aspect, and touching.
Take the time to see PATANG THE KITE.  For those of you near me in Chicago, it opens on June 15.  You won’t be disappointed and you will definitely see that we are all the same no matter what our nationality.
Posted by Unknown at 6:33 AM