Rashida Jones wrote and co-starred in the romantic comedy, "Celeste and Jesse Forever" which premiered this year at Sundance.  Jones' co-star was Andy Samberg who took on the role of "Regular Guy" instead of his typical "Funny Guy."  Don't get me wrong with that statement.  It was a funny movie, but Samberg was the "Straight Guy."  "Celeste and Jesse Forever" was about a couple who were in the midst of a divorce, but neither one was willing to really let go.  They were best friends since college and unfortunately for Jesse, Celeste grew up after that point.  Jesse, however, remained a man-child.  Work?  What's work?  With their different life choices and the referred to fighting from the past, Celeste and Jesse were divorcing.  Interestingly, they remained best of friends much to their other couple-friends' dismay.  When Jesse found out he was going to be a father...and not the father of Celeste's child...the final divorce proceeded.  I don't want to give away any more of the plot line away, but I will tell you that it was entertaining, funny, sweet, and sad all wrapped up in a perfect little It's-Time-To-Face-Reality package. 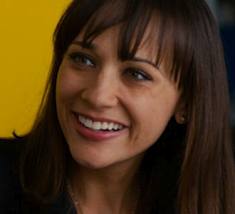 Rashida Jones' character, Celeste, is very similar to her character in Parks and Recreation, of which I am a huge fan.  She was cute, sweet, smart, feisty, and had these sincere brown eyes and honest expression which made you want to be her best friend.  She's the All-American Girl Next Door.  The writing of this movie was real and down-to-earth just like Rashida seemed to be, yet was still very entertaining.  The situations like being depressed about a break-up, using not-so-good judgement of drinking too much to counter-act that depression, then attending a formal engagement party might not lend itself to positive results.  It was a fun roller-coaster ride of emotions and situations that enabled you to have empathy for Celeste.  It was a perfect balance. 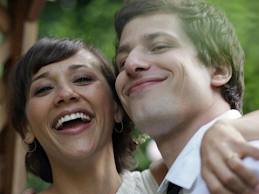 Jones and Samberg were great on the screen together.  You truly got a sense that these two really knew each other and enjoyed being together doing goofy things.  Elijah Wood played Celeste's best co-worker friend with style and panache.  Ari Graynor was a wonderful match for  Celeste's best friend; she seemed the ying to Celeste's yang for more balance.  Now, I don't usually notice music in a movie, but I did in this one!  It was wonderful.  Don't ask me the names, don't ask me the lyrics, because that's just not my thing.  Go to imdb for that info!  What I found was that it was catchy and perfectly matched to whatever the scene wanted to convey.  I loved the opening credits' music and style of introducing the characters.  I felt like someone took their go-to camera, set it on video mode and captured pieces of Celeste's and Jesse's lives. 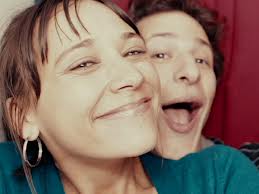 Celeste and Jesse had the unique situation of wanting to still be together, but knowing they weren't the right match for each other.  They did, however, have the common feeling of not wanting to branch out and take chances.  Familiarity, even when it's not a positive thing, is a comfortable aspect of our lives and very difficult to just toss to the way-side.  "Celeste and Jesse" captures this common theme in most everyone's life making it a movie we can all relate to.  Of the current "rom-com's," I would have to say that this film along with "Safety Not Guaranteed" tops my list.