"The Words" Very Slowly Told A Tale by Pamela Powell 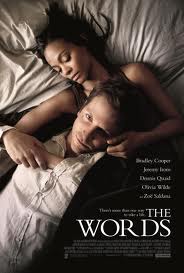 "The Words" has an all-star cast with Bradley Cooper, Dennis Quaid, Olivia Wilde, and Zoe Saldana.  I guess I should rephrase this.  "The Words" has a gorgeous all-star cast!  "What do you love about me?" Rory (Cooper) asks of his wife Dora (Saldana).  "Your eyes," she replies.  Of course!  We all love those eyes!  Cooper was the draw for this movie about plagiarism.  But can Cooper pull off the part of a deceptive plagiarist?  Can he play the guilt-ridden, underachiever son and husband?  I loved Brad (as I do refer to him!) in "The Hangover," "Limitless," and "Hit and Run" to name a few.  I just don't think he was able to pull off this seriously conflicting and complicated role.  Saldana plays her part well as does the remainder of the cast.  Dennis Quaid, J.K. Simmons, and Jeremy Irons have smaller, but vital parts in this movie. 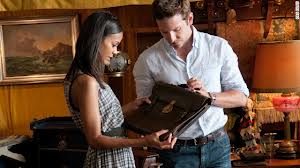 "The Words" was a story about a story within a story.  Sound confusing?  Maybe, but it makes sense in the movie.  The concept itself was great.  As I described the movie to a friend afterward, I thought it sounded wonderfully entertaining.  She wasn't yawning at all when I told her about it.  Unfortunately, that wasn't the case when I was in the theater watching the matinee.  The movie's pace was excruciatingly slow.  I found myself looking at my watch several times and for a movie that is only 96 minutes long, that's not a good indication. 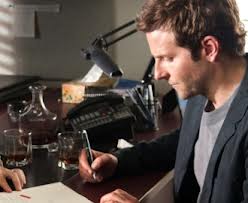 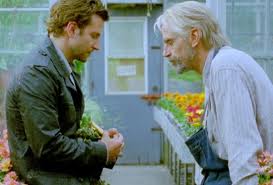 Here's the movie in a nutshell.  Rory Jensen was a mediocre writer who had dreams of being the next Hemingway.  What writer doesn't?  It was when he discovered an old manuscript written by a truly gifted and passionate writer that he realized he would never be a Nobel Laureate.  Rory took that unidentifiable manuscript and ran with it. We watched and watched and watched as he struggled with his decision to ask a publisher to read it.  The true guilt and difficulties arose when the real author identified himself to Rory.  Sounds interesting, right?  Oh, there was so much more that could have been done with this film!  It had such potential.  As I indicated before, it was a story about another story within a story.  Each part of the story was focused upon equally, but for some reason, I felt that it left me hanging.  I never cared for the characters the way I should have.  I didn't see the rise and fall of the characters the way that I wanted to see them.  It was blah.  Had this have been a book, I would have made it through Chapter 1 and then skipped to the Kindle store to see what else I could read.

It's easy to sit back and critique a movie and say which way the writers and directors should have gone with it.  I realize that.  Unfortunately, I have to honestly tell you (this is Reel HONEST Reviews!) what I thought of it.  Save your money.  If you really want to see this one, wait for the DVD.  It'll be out soon. 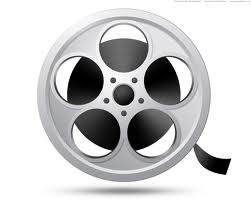