"Looper" A Bit of A Disappointment by Pamela Powell 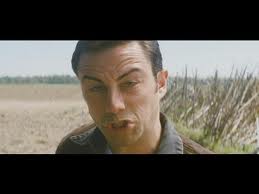 "Looper" starred Joseph Gordon-Levitt, Bruce Willis, Emily Blunt, Paul Dano, and Jeff Daniels...great cast, right?  Time travel was the theme...great concept, right?  Making the choice to eliminate your future self...wonderful conundrum, right?  Putting it all together to keep my interest...not so great.  I remembered seeing a trailer for "Looper" with my daughter who didn't believe that the star shown on the silver screen was Joseph Gordon-Levitt (whom she adores).  I knew it was yet I still had to go to my imdb app to double check my knowledge base.  (Yes, I have to do this often!)  Shockingly, my memory had served me right.  As I now watched the film with Gordon-Levitt, I couldn't help but be continually distracted by the changes in his face to match the older self played by Bruce Willis.  The profile shot later in the movie was remarkable, yet it was still very distracting to see Gordon-Levitt so different.  It was as if he lost who he was and became a less animated and communicative actor.  It reminded me of people who have had too much botox and can't move their faces into expressions anymore.  Anyway, back to the movie itself.  The year was 2044.  Time travel had not yet been invented.  Lawlessness included random, acceptable murders which occurred without question.  30 years from this time, time travel has been invented.  In the future, however, it seemed that arbitrary murders cannot occur without consequence.  The quandary of the 2074 Mob is how to do away with the unwanted.  The answer?  Transport them back to 2044, hire Loopers to terminate and dispose of them for a very high price paid in silver.  The "unwanted" are hooded to eliminate identification and cuffed to deter escaping.  Closing the loop means that the Looper has just murdered his future self, making it more of a suicide.  The Looper was paid in gold and knew that he has 30 years to live a rich life.  But for Joe, played by Gordon-Levitt, he was not going to go so willingly.  Upon his return to his younger self, he appeared without a hood, made eye contact and escaped.  The mob was not happy with this which meant that the mob was hunting both the young and the old Joe and the young Joe was hunting the old Joe.  WHEW!  Pretty complicated, but intriguing, right? 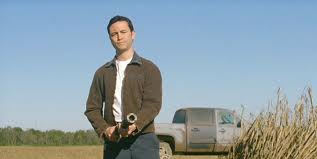 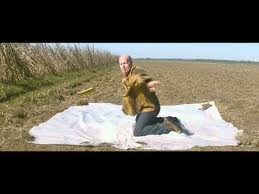 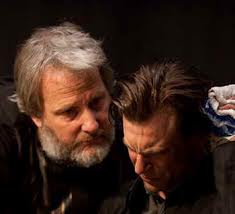 I love science fiction particularly when it has to do with time travel.  "Looper" had a powerful beginning which might make some people uneasy with the shocking violence with no emotion.  But that was an integral part of the movie.  The special effects indicated how the present can affect the future which was thought-provoking...cut the finger off a man now and watch how it disappeared on the future man in the present.  (I've reread this sentence many times and can't decide if I have my tenses agreeing!)  Continue cutting appendages and watch what happens.  I warned you, it was violent, but intriguing at the same time.  Another intriguing aspect was how Willis (the older Joe) reacted to his younger, impulsive self.  I think we can all put ourselves in that retrospective situation and see how naive we were.  In fact, it was interesting to think of Old Joe and Young Joe as truly being two different people.  I think we would all agree that that truly happens.  So I've been pretty complimentary so far with the story and the overall creativity of the movie.  Why didn't this movie keep my interest?  (No, it wasn't late at night...for all those that know my bedtime is 10 pm.)  There was high action in many parts, but to be honest (it is Reel HONEST Reviews, you know), it got repetitive and scarily, I must admit,  I became desensitized.  Jeff Daniels played the future crime boss who traveled back in time to run the past for the benefit of the future.  I'm a huge Daniels fan, but I don't think he cut it as the heartless mob leader.  Willis played his part perfectly.  He delivered some humor and some typical "Die Hard" scenes which is truly his forte.  Emily Blunt played Sara, the mother of a child whose identity I will protect for those who have not yet seen the movie.  She did a wonderful job as a mother who would do anything for her child yet confused by some of her son's actions.  She was tough yet loving and caring in a world where the two seldom met.  So again, why was I not engaged in this film?  I think it had to do with the editing and directing.  I'm guessing that a good 15 minutes of the movie had to do with spending time on close-ups...LONG close-ups.  Yes, I understand that you need to really see the actor and things can't be rushed, but really, the close-ups were way too long.  I also felt like you didn't need to think while watching this movie.  One of the fun things about sci-fi movies is the need to think and try to predict and fit pieces of the puzzle together.  Very little of this was necessary.  You were basically spoon-fed all the information and the little puzzle-solving you needed to do from your comfy seat was quickly solved one scene later.

So that's my opinion of "Looper." Great cast, cool concept, wonderful dilemmas, but the overall effect for me was apathy and monotony.  I know my opinion is different from many, but that's Reel Honest Reviews...I'm going to tell you how I "reely" feel!