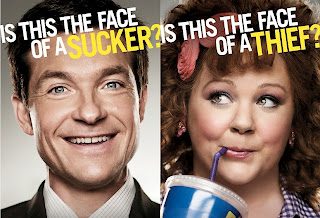 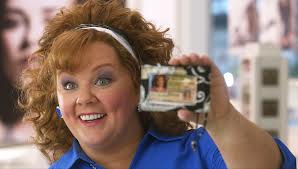 I didn't have my hopes up about "Identity Theft."  I was afraid, as with so many similar comedies, that they gave all of the funny parts away in the trailers.  While that wouldn't be completely fair to say, it comes close.  Jason Bateman has been a favorite actor of mine for years.  (I will also publicly admit that I had, ok have, a huge crush on him from the time he was in 80's tv shows to "Dodgeball," "Extract" and even "Horrible Bosses."  Then we have our own Illinois actress Melissa McCarthy who made me laugh until I cried in "Bridesmaids."  I knew it was asking too much to like this movie. 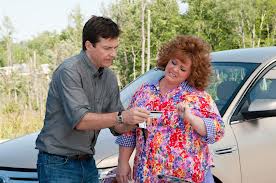 The concept of identity theft was a relevant one to our current times.  The beginning of the movie hit home with how trusting we all are with people.  That truly does make us targets in identity theft.  And how simple it appears to be done as with the case of Jason Bateman's character Sandy Bigelow Patterson.  Sweet, naive, trusting, follow-the-rules Patterson is easily duped by the conniving and deceitful Diana played by McCarthy.  We watched uncomfortably as his world unraveled from the effects of Diana's thievery.  Frustrated with the inability for law enforcement officials to put this matter to rest, Sandy took matters into his own hands.  From this point, the movie lost me.  It was one ridiculous event after another, introducing additional characters to fill in time and try to make some plot come together.  Eventually, the humor was completely gone and the sappy plot line took over.  As I rolled my eyes and finally watched them tie up all the loose ends, all I could think of is, "Sh**!  I was just conned out of $5.50 and 112 minutes of my time that I'll never get back!" 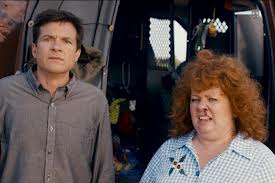 "Identity Thief" had some humorous parts, but not enough to make it worth while seeing in the theater. If you must see it, I would wait for the DVD or for it to come out on Netflix.