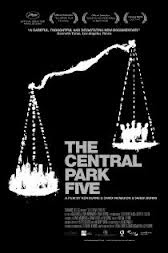 THE CENTRAL PARK FIVE was a documentary by the famed Ken Burns and his daughter Sarah.  I am a new fan of documentaries.  Before I began reviewing movies, I used movies to escape reality.  It wasn't that my reality was so awful.  I just wanted an escape from grad school finals, financial woes, or crying babies.  You know, the usual stuff.  It wasn't until Sundance 2012 that I was thrown into the eye-opening world of documentaries and how this "real stuff" could change me and how I viewed myself and the world.  "The Central Park Five" was one of those documentaries that I had the opportunity to view on demand recently that will continue to haunt me as does "Ai Weiwei, Never Sorry."  Quite ironically, "The Central Park Five" was a classic movie theme of a mix-up in identity and accusations, but unlike the classic movie theme, the identities and accusations weren't cleared until these five young boys lost precious years of their lives never to be returned to them. 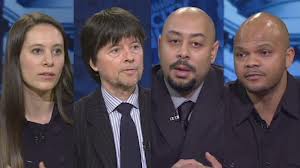 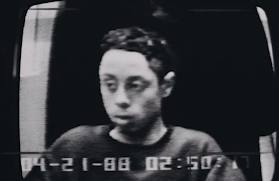 "The Central Park Five" outlined the events that occurred one night in 1989 when a woman in Central Park was brutally raped.  Five boys were taken into custody and questioned about the event.  The documentary showed live footage of the videos taken during questioning at the police station.  As an outsider looking in, I couldn't believe that these kids were treated the way that they were.  I couldn't believe that parents weren't given their rights to help protect their children.  I just couldn't believe the entire story unfolding before me.  Each child, and these were children, had a little different story.  For example, Kharey Wise who obviously had a hearing impairment and possibly some learning disabilities was questioned after giving him his rights.  Does any kid really understand "his rights?"  I looked at the authorities in charge of this case from the police to the DA and I was appalled.  Find a culprit for the crime even if it's the wrong one.  No one will care about these kids because they are from the wrong side of town.  My heart broke.  What if that was my kid.  What if he was in the wrong place at the wrong time.  What if?

The parents of these now grown kids as well as the actual five boys, now men, were interviewed.  It was so disturbing to see how the system manipulated the situation with no care for innocent lives.  With convictions set in place, the path of life for  these young people was set in a different direction, never to be set back in its proper place.  The most harsh conviction, if there could be a severity scale, was to Kharey Wise who was the eldest of the group...17 years old.  He was sentenced and sent to Rikers Island.  A 17 year old.  My God, can you imagine your teenage son being sent to Rikers?  That's not to belittle the sentences of the other four.  The rest of their teenage years and young adulthood was taken from them.  I can't even begin to imagine what they went through and to be honest, my psyche won't allow me to.

These now grown men are out of prison trying to make a life for themselves.  Ken and Sarah Burns are bringing us their story.  Their lives are an example of what happens when we go on a witch hunt and have a pack mentality.  It's appalling what the leaders and authorities did under this pack mentality and I can only hope that perhaps this example and the documentary can help prevent this from happening in the future.  Unfortunately, as a good friend of mine explained to me as we discussed this documentary, it's not the first time this has happened in history and I'm afraid it won't be the last time.  Yes, I'm afraid.
Posted by Unknown at 7:46 AM