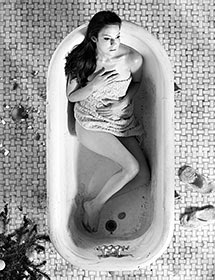 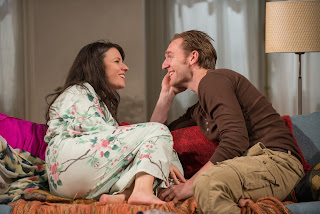 I bet your marriage is perfect.  I bet you and your spouse communicate effectively about the day to day activities as well as your hopes and dreams for you and your children.  I bet I’m living in a fantasy world if I believe all that.  I’m married.  I know.  Let’s face it, men and women communicate differently.  In the new Steppenwolf production of ‘Belleville,’ they throw in a few psychological disorders just to play with the whole concept of effective communication in a marriage.  Abby and Zack, professionals living in a chic part of Paris, learn more about themselves than either of them had planned.  Coming to grips with this knowledge brings both of them to a point of no return.  Their friendship with their landlords is the impetus for this self-realization coming to the forefront of their rather delicate and tenuous lives. 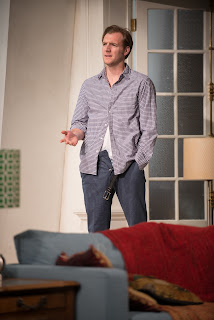 Zack, a medical doctor, was proudly completing research in pediatric AIDS at a research center in Paris and Abby, a bubbly, nervous yoga instructor, struggled with the everyday activities like grocery shopping.    Communication problems were evidenced from the moment they interacted on stage.  Abby unexpectedly came home early from a yoga class because no one showed up.  Thinking she was alone, she waltzed into the bedroom and found her husband watching some adult entertainment on his computer in a rather uncompromising position.  As Zack hurriedly zipped his trousers and ran out of the bedroom after her to "explain,” it was as if the two barely knew one another.  Between fidgeting and stuttering, the couple moved on to discuss safer issues like Christmas shopping.  This instance was just a pebble in the path for this couple to ride over.  As the play continued, the pebbles became rocks and then impassable boulders  Explosives would be required to make this road passable. 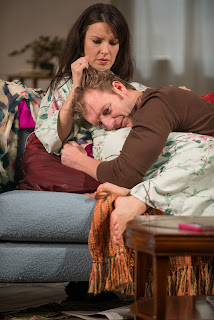 Zack and Abby’s story was truly a love story based in untruths and miscommunications.  Sounds like a lot of other relationships I know.  However, this couple really knew each other in many other respects.  They finished each others sentences, they knew the stories their spouse was going to tell with just the utterance of a single word.  But with each of these stories, and a little bit of alcohol or other stimulant (or depressant), the words became daggers aimed straight for the heart.  Again, this sounded reminiscent of several couples I knew.   But with Zack and Abby there were inherent differences.  For example, how deep and dark were their secrets?   How far down the abyss of life would their untruths take them before they could surface?  Zack and Abby soon found out if it truly was a bottomless pit.

All of this dagger thrusting wasn't without humor and sweetness, though.  Abby and Zack had known each other for years.  With Abby’s history came sadness.  Zack was understanding and patient and offered apparent unconditional love.  Abby was proud of her husband for all of his accomplishments.  Her family was proud of him as well.  However, some inherent mistakes took their toll on the couple and more was revealed about each of their insecurities, immaturity, and poor decisions.  A psychological evaluation of both characters could divulge much more than just a young couple who were still immature in their relationship. 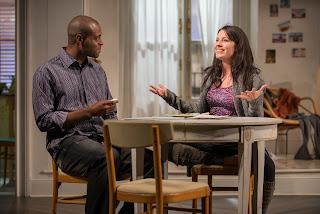 Abby, played by Kate Arrington, captured the viewer’s heart with her sweet, child-like insecurities about being in this strange country where she didn't speak the language. Her husband, however, was a different nut to crack.  He was a little more complicated and I was continually trying to figure out exactly where he stood.  The landlords, Alouine and Amina (Chris Boykin and Alana Arenas) appeared to be the younger, yet more stable and secure couple.  When the two couples mixed, with their own set of communication issues, the impending explosion occurred. 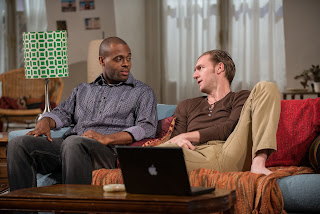 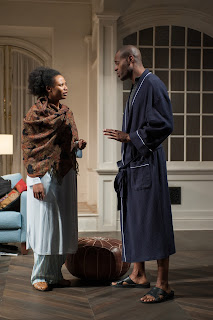 Kate Arrington’s measured and deliberate speech kept you anchored to her character.  The deliberateness of her prosodic delivery added to some of her awkwardly humorous lines.  The intentional word use of “buddy” and “homey” indicated subtle relationship issues between the two.  With the majority of the play having just Zack and Abby on stage, it was a strong set.  The script was tight for the most part.  Interspersed humor kept the play moving in the right direction.  Where the play lost me was the end as it made me angry.  The final scene of several minutes took place solely in French.  I was a speech-language pathologist in my former professional life and I think that I can read body language and tone of voice quite well.  I thought I got the gist of what  the couple on the stage was communicating, but what if I was wrong???  What if there was a huge reveal at the end and because I chose to take Spanish in high school instead of French, I completely missed the ending???  Adding to my confusion was the higher decibel background noise of the busy French street during the conversation in French.  I strained to try and hear the two on stage.  I also couldn’t really see any expression on their faces.  Was that intentional or am I getting old (not!) where both my hearing and vision are failing me in this rather intimate theater?  With my utter disbelief that I didn’t understand the final scene, I took it upon myself to chat with my neighbor about it.  Her response was, “It was necessary.”  Hmmmm.  Several other people in the audience during the post-discussion (I love this about the Steppenwolf), stated that it was “brilliant,” and “poignant” and now I’m paraphrasing, “...a wake up call to Americans that we are not the only ones in the world and other languages are spoken.”  Again, hmmm.  I wonder how the French audience would react to an English ending?

BELLEVILLE is a wonderfully touching play delving deeply into the psyche of two married couples and their inherent communication or lack thereof.  Intermingling humor and balancing it with reality gave this play clear and decisive form that was truly entertaining.  With no intermission and its 100 minute running time, it was captivating and time flew by.  Completely entertaining adequately describes this play with the exception of my perception of the ending.   Grab your spouse, have dinner at Vinci or Black Duck and spark some novel conversation based on seeing this play.

BELLEVILLE is playing at the Steppenwolf Theatre through August 25 in the downstairs theatre.  Tickets range in price from $20-$78 and $15 for students.  Go to steppenwolf.org for more information and to purchase tickets.  If you go, be sure to catch the post-production discussion as they are always enlightening.  Please be sure to comment on my site about the ending after you see this play!  I’d love to hear YOUR thoughts!