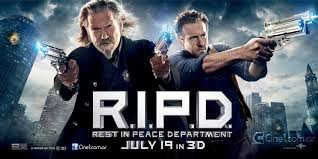 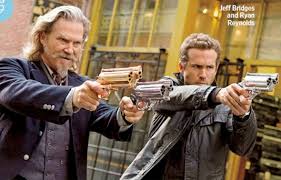 “R.I.P.D.” opened today in direct competition with “Red 2.”  Interestingly, both the original “Red” and “R.I.P.D” were directed by Robert Schwentke.  With his previous success and experience, can Schwentke bring “R.I.P.D.” to life with Jeff Bridges and Ryan Reynolds?  Can he compete with the sequel to his film?  Read on to decide the outcome for yourself. 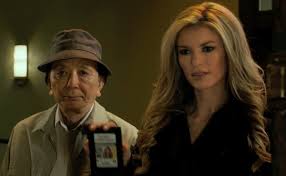 Officer Nick Walker, madly in love with his beautiful wife, left for his day’s work as a Boston police officer.  Sadly, Officer Walker was murdered in the line of duty later that day.  As he ascended to meet his Maker and stand in judgement, he abruptly took a detour and was given a choice:  Be judged as a dirty cop or help out the R.I.P.D. (Rest In Peace Department) to capture Dead-O’s who walked among the living having somehow escaped their own judgement day.  Dead-O’s wreaked havoc on everything they touched and impacted important things like wide spread disease and cell phone reception. The choice was simple for Nick as he accepted his 100 year tour as an officer of the R.I.P.D. Officer Walker partnered with Roycephus Pulsifer, aka “Roy” to find these evil undead and put them to rest once and for all. 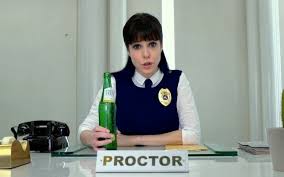 This action-comedy truly had a unique storyline that was set up for creative special effects, interesting banter, and humorous situations from the beginning.  Roy and Nick, at odds with one another from the moment they met, had a chemistry not unlike nitroglycerin paired with a match.  The two worked together toward the same goal, but not without a few wisecracks and gags which definitely elicited several chuckles.  As the intensity of the film increased and an impending apocalypse (Yes, here is another movie that has an apocalyptic theme!), more explosions, car chases, and demolitions occurred.  Dead-O’s were everywhere and their metamorphosis from normal human appearance to their true look was mesmerizing. With the two worlds of the dead and the living intersecting, an almost cartoon-like world began to develop.  Could the world handle that in addition to the Wild West and modern day police tactics colliding?

Jeff Bridges nailed the old western cowboy character which came as no surprise.  I think he had some practice with “True Grit.”  Ryan Reynolds’ role as the handsome, charming, doe-eyed hero wasn’t much of a stretch either.   It was the interaction of these two opposites that was most entertaining.  Mary-Louise Parker as the “Proctor,” was the epitome of unreal cartoon perfection.  Her role gave the film the edge that it needed to lift it off the ground.  There always has to be a bad guy in all of this, but I don’t want to spoil it for you.  Suffice it to say, the role was well-cast.

Given the unique storyline of this film, “R.I.P.D.” still followed a typical format which gave way to predictability. Even with this predictability, it was still entertaining. It allowed you to escape into this unrealistic adventure, hold you willingly captive, knowing the entire time how it was going to end, but you still enjoyed watching the story unfold.  Thankfully, as the film wrapped up its loose ends, it still had a few amusing surprises.

“R.I.P.D.” was a lighthearted, predictable, yet entertaining movie of total escapism.  The characters and special effects kept you interested even if the story became foreseeable.  If you’re in your teens or older, you’ll enjoy this high-spirited film about love, loyalty, crime-solving, and justice with some captivating special effects and high action. If you’re looking for an intellectually stimulating film, skip this one as you’ll be disappointed.  If you just want escapism and entertainment, you’re in luck.