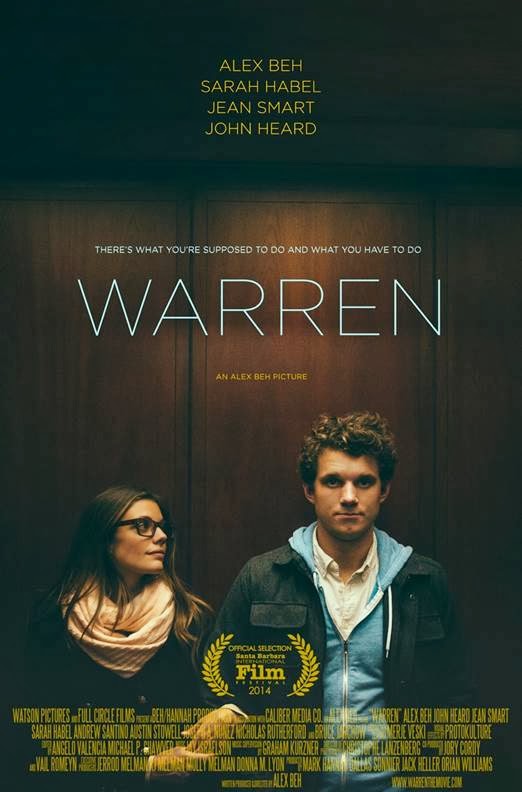 "Warren" is a film we can all relate to.  Whether we are a parent or a twenty-something trying to figure out where life will take us, there is something for everyone to enjoy in "Warren."  Written and directed by, as well as starring Alex Beh, this film captures the turning point in one young man's life and how it affects those near and dear to him.  As quoted from the film, "There's what you're supposed to do and what you have to do."  The choice is Warren's.


Warren, the main character, has given up on his dream of being a comedian and now works as a barista at a coffee shop in Chicago.  Frustrated by his spinning wheels and lack of forward progression, he bumps into his lost love.  Old feelings come rushing back, but this woman is now engaged to be married.  Warren must now decide where his life will take him. Will he "follow the fear or forever be stuck in neutral?

"Warren" has such a talented cast and is set in the perfect city---Chicago.  Yes, I'm biased, but that's ok.  Watch the film and I am sure you will understand my prejudice.  "Warren" captures Chicago's lake, its neighborhoods, and its vibrancy.   Along with Alex Beh, John Heard, Jean Smart, and Sarah Habel star in this "slice of life" film.  The first scene sets the tone of the entire film.  Jack (Heard) is talking to his son, Warren (Beh), 10 feet away...using a megaphone. This is exactly the embarrassingly funny stunt many fathers would do if they had a megaphone in hand.  As the neighbor looks casually over to see today's antics, Warren sits dreamily in the old Porsche stored in the garage, key in the ignition, ignoring his father for just a few more moments.  Immediately, you see that dreams have been either lost or put on the back burner.  In the film, we discover that the father-son connection is very close and that trying not to have the apple fall far from the tree is a conscious choice.

Warren is like many other twenty-somethings trying to fulfill dreams and seize the moment when they can. Regrets at an early age are a hard topic to deal with and when Emma (Habel), Warren's former love, bumps into Warren working at the coffee shop, the disappointment and embarrassment is palpable.  Warren's support system as he works out his thoughts and feelings about Emma are comical, yet real.  With stand-up comics for friends, there is no lack of humor in dealing with this situation.  This well-rounded film also incorporates Jack and Warren's relationship, both past and present.  Jack has never given up on loving his soon-to-be ex wife, Claire.  Jack and she have been working on getting those final divorce papers signed for 5 years.  Unfortunately, Warren gets caught up in the havoc that occurs when you still live near your parents and don't pursue your own dreams.

This strong cast brought life, love, and family to the screen.  John Heard and Jean Smart are the perfect North Shore separated parents who still share two children together; one adult and one in high school with some rebellion issues.  The film has two focal points:  Warren and Emma, and Warren and his father.  While Warren's feelings of love and loss with Emma are evident, an equally heart-felt part of this movie is his relationship with his father.  The connection between these two men is not only seen, but felt by the viewer.  Watching Heard's character sitting and eating pizza with his boys is so natural and realistic that you truly feel like this is a family.

Heard transforms himself into Warren's father, Jack.  But his character is much more complex than just being Warren's dad.  Jack has his own struggles, professionally and personally, that are so subtly revealed that you can empathize with his every emotion.  But at the end of the day, you realize that this father wants exactly what every parent wants for his child---to be happy.

While the entire cast is compelling, I would be remiss if I didn't mention one other standout in this wonderful cast:  Marc Grapey.  A Chicago area native (Kankakee), Marc's character of the obnoxious cell phone user/customer at the coffee shop becomes increasingly funnier with each scene.  I know we have all encountered such a person and he completely embodies that character.  Well-done!

It's so refreshing to see a young writer and director take on a film and successfully tell an entertaining and emotional story.  The keen direction and intelligent writing pulls you immediately into this story, reeling you along and allowing you to laugh at irony and look at your own life by comparison.  There are even a few words of wisdom you might want to take to heart.   Beh brings this tale home, deftly tying up all loose ends that you are supposed to know.  He leaves a few things to your imagination which makes you think and come up with your own back story about things like why the house is slated for demolition.  "Warren" is a slice of life full of emotion and reality.  Again, well-done!

Watch for the interview with Alex Beh or catch it soon on WKCC's The Reel Focus!