"ADRIFT" EMBARKS ON AN EMOTIONAL VOYAGE by Pamela Powell

Polarity Ensemble Theatre presented “Adrift” Friday evening to a packed audience at the Greenhouse Theater in Lincoln Park.  This four person play, written by David Alex, focused on the ever-challenging father-son relationship and its components.  Maggie Speer, the director, deftly guided this all male cast to portray a wide variety of self-imposed pressures that parents and children feel, but don’t always communicate or even recognize. 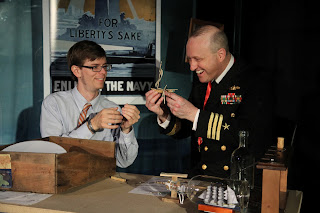 Life is all about the choices we make and then hope we won’t regret what we have done.  Unfortunately, we aren’t provided a crystal ball as the lead characters Isaac Abbas and his father, Jack a high ranking Naval Officer, demonstrated.  We watched Isaac at many stages of his life interacting with his highly disciplined father.  Isaac admired his father, and like most children, he looked for his father’s approval and ultimately his pride.  Isaac’s father was with him subconsciously every step of the way.  From his interview with the principal of a school for a math teaching job and then to teaching  high school kids.  Isaac had a lot to learn and relied heavily on what his father had taught him.
Communication between a father and son can be a tricky and sometimes non-existent aspect in a relationship.  Both sets of fathers and sons on the stage portrayed this all the while seeing how each one wanted nothing more than to be close to and understand the other.  Isaac attempted to impart his wisdom of 20-something years on to the young, but misunderstood high school student and son of the principal. Truly, wisdom was there as he expressed that a “parent and child [are] raising each other on a journey.”  So true.  There is no handbook for a parent or a child to follow.  But those choices we made on this journey of life directly impacted the future. 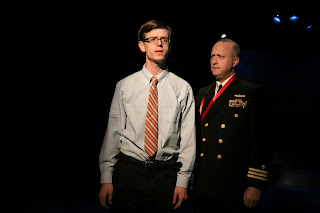 As I watched this smartly written and intuitive play, I couldn’t help but relate closely with the characters even though I am neither a father nor a son.  I am, however, a parent and a child.  I lost my father, Jack, a WWII Army Air Corp hero, in January.  I didn’t know he was a hero until we sorted through his belongings.  It was just something my dad never talked about with me.  However, my dad and I were close, utilizing hiking and fishing as our medium of communication; similar to the play’s characters’ use of golf.  I have regrets looking back on our relationship and those choices I have made will haunt me.  I can only hope that maybe I can impart my wisdom on my children so that they have fewer regrets. 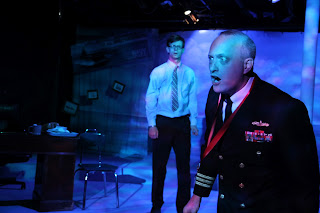 “Adrift” is a wonderful and realistic story of relationships,  communication, and parenting.  Casting was perfect and the acting was superb as the story peeled away layer by layer each character’s personality and feelings.   This 90 minute production pounded home the importance of choices and the realization that we make the decisions we do based on the circumstances at hand.  When a play can hit home and truly make you look at your own life, it’s a winner.  You can’t ask for anything more.
“Adrift” is currently playing through August 26 at the Greenhouse Theater Center Upstairs Studio, 2257 N. Lincoln Ave., Chicago.  Tickets can be purchased by calling the theater at 773-404-7336 or on-line at www.greenhousetheater.org.