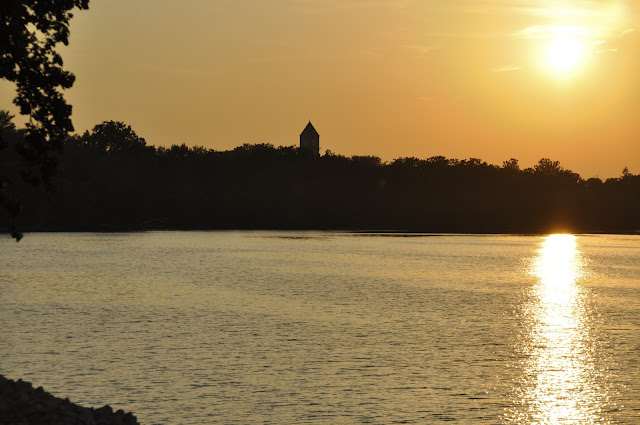 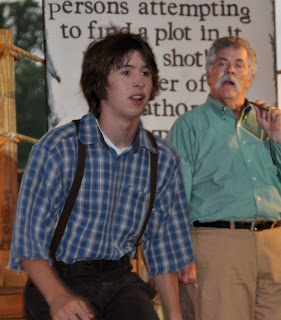 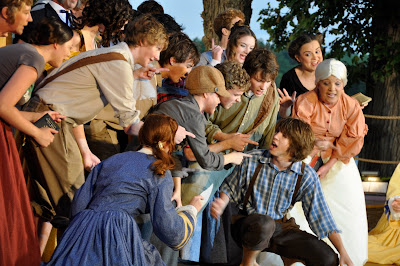 "BIG RIVER: THE ADVENTURES OF HUCKLEBERRY FINN" took the stage for its final performance Sunday evening.  If you didn't see it, it's too late!  YOU MISSED IT!  Let that be a lesson to you to buy your ticket in advance next year and take advantage of our beautiful summer evenings.  As the crickets began to chirp and the frogs and toads started singing their song, the cicadas didn't want to miss out as they too joined the perfect low cacophony to be a part of the outdoor theater ensemble.  A beautiful evening lay ahead with patrons in various portable chairs, gnoshing on hors devours and chatting excitedly for this final performance.  The breeze off the river was soothing and the beauty of the sun setting framed the stage perfectly.  There couldn't have been a more perfect backdrop for Huck, Tom and all the gang to perform.  I couldn't help but notice in the first half of the show, how the sun's golden rays reflected off the leaves and lit the actors faces more perfectly than any man-made light ever could.  Then, on cue, Mark Twain (aka Dennis Yonka) took the stage to quietly inform the audience what lies ahead. 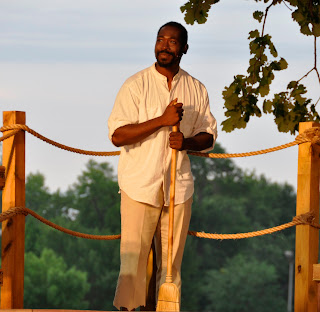 Huckleberry Finn, played by Blake Clatterbuck, bounded onto the stage, speaking to the audience and recognizing Mr. Twain and all his abilities to tell (mostly) the truth.  Adventures ensued with Huck, Tom, and Jim.  We watched and listened to the melodic voices of all the characters, both the leads and the choir.  I was amazed whenever the choir took the stage as they then belted out lyrics that I am sure reverberated off the banks of the Kankakee River for Bourbonnais to hear.  This tale, told as it was in the 1800's, was harsh but true to the era.  As Mark Twain (who coincidentally lived in both my and my husband's hometowns in NY!), saw the unfair delineation of races, he also had the courage to write about characters who struggled with that same realization.  Because of his forward thinking, he is still relevant today. 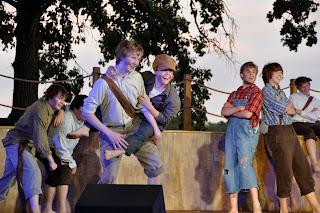 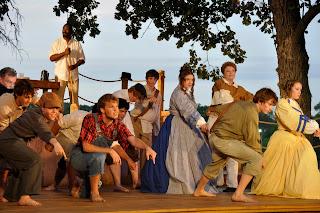 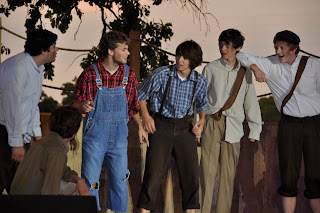 The second act, now set in the dark, illuminated artificially, but beautifully, continued along the river complete with natural background music and the  talented orchestra as well.  The adventures included many familiar tales that I remembered reading as a child in several of Twain's novels.  The actors and director beautifully depicted these stories from Huck dressing like a girl to Huck saving Jim from the slave trade.  The actors were truly talented in their abilities not only to deliver believable lines, but to sing.  Oh, the singing was phenomenal.  Standouts to me included, but of course were not limited to, Briana Bury, Erica Hodges and Cassandra Hoggins who played Mary Jane Wilkes, Alice, and Alice's daughter, respectively.   All of these women called to you for your attention to not just hear, but to feel their voices and what they were singing and saying to you.  So crisp, clear, beautiful and strong were they!  I could have listened for hours to those voices. 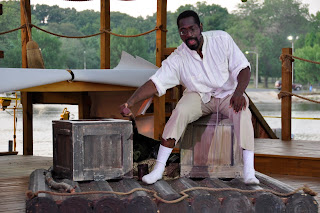 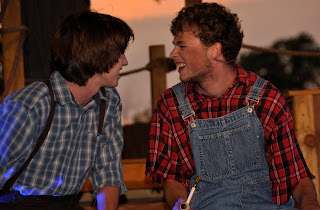 Comedy, a big part of Mark Twain's books, was not lost here but emphasized with perfectly cast actors such as Pat Skelly and Roger Allen Jones       who played  Duke and King, respectively.  No holds barred here as we watched Mr. Skelley don a "tarred and feathered" suit and Mr.  Jones in an adorable outfit with one large breast in the center and a nose-eye!  I really can't explain it any further than that.

As we slowly filed out, I watched as the cast congregated;, appearing to not want the night to end.  It was obviously a close group of people who worked so hard and wanted to cherish each and every wonderful moment.  To have fun AND to make lasting bonds and memories is the epitome of doing a production.  Cheers to all of you! 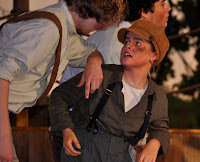 The actors, directors, patrons, and other supporters enabled our area to be a part of an extraordinary event.  We have such quality performers here and I feel proud to be a part of a community that supports such an endeavor.  If you missed it, you can be way ahead of the game for next year's production of "CHICAGO!"  Visit www.actingouttheatreco.org for more information.