BEASTS OF THE SOUTHERN WILD by Pamela Powell 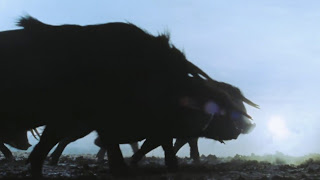 "Beasts of the Southern Wild" premiered at Sundance this year with so much buzz!  Every bus I took, every party I went to, every screening line I stood in, people talked about "Beasts."  Now having seen it, I completely understand.  "Beasts of the Southern Wild" is Benh Zeitlin's first feature film at the age of 29.  We saw the world, the Delta community called the "Bathtub," through the eyes of a 6 year old girl named Hushpuppy.  The world was a beautiful place where every day had the potential to be a party, but also a place full of fear.  Hushpuppy imagined the world could end with the melting ice caps of the world which will then in turn flood her boloved home segregated from Louisiana by a levee.  She watched as a catastrophic storm, which I imagined to be Katrina, decimate the area.  The imagination of what's really out there, beasts called aurochs from prehistoric days, and a mother long-disappeared, haunt hushpuppy as she and her father struggle with survival. 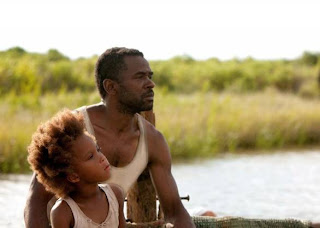 The movie had a real quality to it which felt a bit like a documentary.  I kept having to remind myself that it was a movie with actors.  Quvenzhane Wallis played Hushpuppy with a naturalness I have never seen in an actor this young.  The narration, by Huspuppy, simply yet eloquently let you in on her deepest thoughts and child-like perception.  Dwight Henry, baker turned temporary actor, played the unstable, tough-love father named Wink.  Wink lived day to day and generally, but not always, provided the bare essentials for his daughter who lived in a separate "home" next door.  Sadly, he disappeared for days and Hushpuppy had to rely on her 6 year old wisdom to survive, finding comfort and security in the one remaining item left by her mother:  a tattered basketball jersey.  Hushpuppy desperately needed her mother to be a part of her life and we watched as Hushpuppy lead her crew in search of the missing mother.  This tenacious and brave 6 year old showed strength in every aspect of her young life. 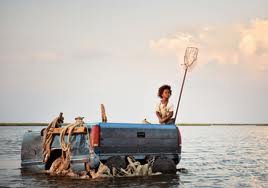 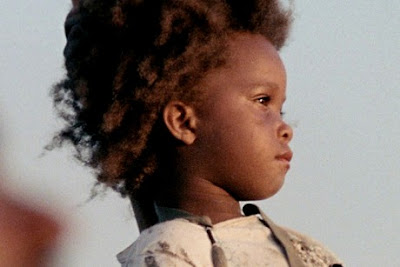 "Beasts of the Southern Wild" was a visually captivating movie showing the sights and sounds of the Bathtub people as well as the imagination of Hushpuppy.  The makeshift boats, the life-style and priorities of the small group of people of this region seemed to challenge mother nature by their very existence.  They pulled me in to their meager lives, helping me to understand those who didn't want any outsider's help during the real life catastrophe of Katrina.

The story of Hushpuppy and her father's relationship during a traumatic time is one of genuine love and pride.  A wonderful movie told from the perspective of an extraordinary 6 year old.  A movie you won't want to miss!