GRUESOME PLAYGROUND INJURIES CUTS TO THE CORE by Pamela Powell

Rasaka Theatre Company presented Gruesome Playground Injuries which played to a near sold-out crowd in the vintage and intimate theater so representational of Chicago, The Chopin Theatre.  Rasaka Theatre Company is based in Chicago and is proud to state that they are the first South Asian American theater ensemble. Utilizing South Asian artists and telling their stories in order to enrich the theatrical community is one of their goals.  From what I saw this evening, Chicago's theatrical environment was absolutely enriched because of this company. 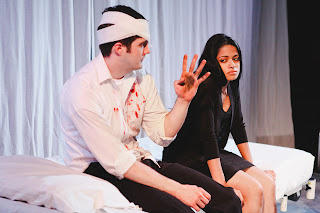 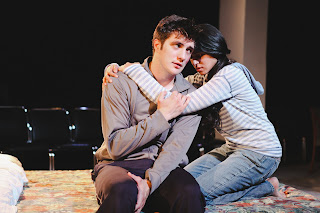 The cast of Gruesome Playground Injuries was small; Mouzam Makkar played "Kayleen" opposite to Tim Martin's "Doug."  The two actors easily carried this huge task of entertaining an audience for 90 straight minutes with not even a wardrobe change behind the scenes.  All scene changes occurred on stage and by the two actors, before your eyes with the wonderful interlude of well-chosen music.  The simple set design quickly morphed from a hospital to an apartment to a nurses office. The actors redressed, put on prosthetic devices such as chipped or missing teeth, bandages, and wounds along with make up to look like bruises and mud.  This had to have been a daunting task, but as I stated previously, these two actors did it with ease.  The story revolved around the initial meeting of Kayleen and Doug at the age of 8 in the school's nurses office.  It was apparent from the beginning that Doug is a bit accident prone due to his "bravery!"  The acting was so spot-on along with the deft writing that I could easily see these two adults transform into 8 year olds who called each other stupid and retarded.  As the time slipped away, the two became adults in their 20's and then time rewound back to high school.  As we saw glimpses of the future, it also explained some of the past.  The two characters formed a bond that only few of us can ever have with someone of the opposite sex.  They are best friends.  They know the good, the bad and the ugly about each other and still have a strong love and bond no matter what.  Doug and Kayleen were extreme opposites in many ways.  One of the most significant and consequential ways was that Doug showed his injuries on the outside and Kayleen had the more devastating injuries psychologically.  As I grew to know these two characters, they pulled at my heart.  I cared about them as I could see how much they cared about each other. 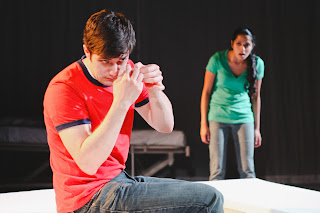 Chicago is so lucky to have such talented actors and small venues to perform.  Gruesome Playground Injuries entertains and shows us the importance of friendships and how we need to be there for each other to heal both visible and invisible injuries.  This is a heartfelt play that is reminiscent of 500 Days of Summer with its style of story-telling, but it goes much further as it addresses a friendship and love from childhood days.  We also see both sides of the story.  Well done!

Gruesome Playground Injuries, by Rajiv Joseph and directed by Lavina Jadhwani plays through August 5 at the Chopin Theatre, 1543 West Division.  For tickets, visit www.rasakatheatre.org.  The venue is vintage as you feel like you are in a club from the 20's while you wait to be seated.  The theater is intimate so there's not a bad seat in the house.  And dining is great nearby, especially if you like Sushi!  Usagi Ya is right around the corner!  Take advantage of what we have in our own backyard!  It's a great playground!
Posted by Unknown at 8:05 AM