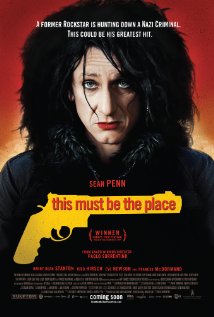 "This Must Be The Place" screened at Sundance this year and I must admit that I was initially shocked by so many aspects of the movie.  My first shock was that I was sitting one seat away from Harvey Weinstein.  My second shock was that he had his blackberry out and texted or searched or did whatever during the entire first half of the movie!  After that, thankfully, he left so that I was not blinded in the left half of my left eye while watching any longer!  Anyway, back to the movie.  Sean Penn played a famous has-been rock star from the 80's named Cheyenne living in Dublin.  Cheyenne continued to wear the garb and the make-up from that era as if everyday was a performance.  Frances McDormand played his wife and just the relationship between two of them could have been an entire movie.  Cheyenne, however, has a few different relationships with various people such as his mother and a teen.  It is through these relationships that we started to get a clearer picture of who Cheyenne really was.  The unfolding of his tightly guarded personality unraveled more quickly when Cheyenne travelled back to the States after he learned of his father's death. 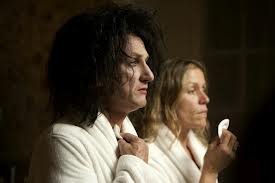 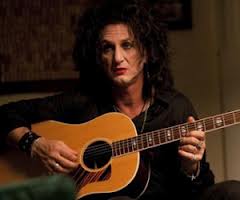 Sean Penn played this rocker has-been skillfully.  As soon as he uttered his first sentence, my thoughts went immediately to, "Wow!  This guy did WAY too many drugs!"  His affect appeared flat.  His voice was monotone and slow.  He was devoid of emotion.  But there was something in the way his flat affect delivered the lines that did convey what was necessary.  Frances McDormand's character was just as quirky and bizarre to compliment in a yin-yang sort of way, Sean Penn's character.  This was a unique movie that started along a path and you just didn't have a choice but to continue following to see where it would lead.  The movie took many unpredictable side roads, full of bumps to enlighten you, then bring you back to the main road.  In fact, it brought you right back to where you wanted to be.  What a great ending!

I will admit one more thing to you.  I didn't love this movie when I left.  In fact, it was a few months later that I started to think about it again.  At this time, I think I started to appreciate what I had seen.  The acting was great, although bizarre.  The characters were peculiar but fully developed to enhance what we knew and would know about the main character, Cheyenne.  The story-line was very unique and unpredictable.  Superb acting with a unique story line equals a good movie.
This movie, however, isn't for everyone.  You need to have an open mind and appreciation for peculiar personalities.  When you can, you can see the common element among every person which then enables you to see that what's so different on the outside really isn't so different on the inside.  Then, trust me, you will enjoy the movie.

Oh!  Two more things...The music is great!  It's David Byrne! And turn your cell phones off...everyone...no exceptions...no matter what your name is!