IT'S A DISASTER IS A TRIUMPH! by Pamela Powell 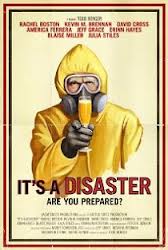 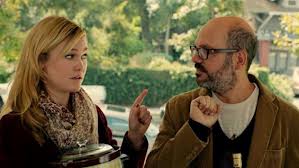 Writer and director Todd Berger brings us a wonderfully written and charming film called "It's a Disaster" about the end of the world.  How could this topic possibly be charming?  Mr. Berger's ability to look at four couples' relationships and how they deal with their impending and untimely demise is artfully and humorously depicted.  The end is near, yet somehow, by virtue of human nature, these couples deal with issues unrelated to "the end."  Who wants to hear bad news?  Who really wants to deal with it?  And when we do hear it and begin to deal with it, it's easier to other things first.  Right? 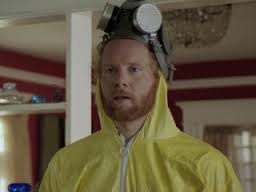 In "It's a Disaster," four couples gathered for their weekly "couples brunch."  Each couple had issues.  There was the couple that was always late, the Vegan, the not-married-yet (don't ask why) couple, and the new "friend" in the couple group.  We learned a bit about each person and his or her idiosyncrasies.  It was also apparent that a lot had happened in the past which makes you question some of their interactions.  All of your questions will be answered eventually.  As the couples sat down to dine, they were interrupted by their neighbor who shows up in a HAZMAT suit.  They had been gloriously oblivious to the end of the world until this time.  Everyone's true colors started to show and that was not always a pretty sight!  Their impending demise took them on a twisting, turning ride of truths and humor.  With a focus on amazingly unimportant details in life such as how to accurately pronounce "duct tape,"  (One of my pet peeves too!) it was evident that no one was truly prepared for survival or the opposite.

"It's a Disaster" starred Julia Stiles and David Cross and was truly a pleasure to watch.  The entire cast gave a natural performance so that I, the viewer, felt as if I was a fly on the wall watching the tale unfold.  Although this film is about a horrific concept, it was generally quite light and humorous.  Obviously, the writing and directing by Todd Berger was exceptional to elicit these performances.  "It's a Disaster" should be a run-away hit in the dark comedy genre this year.