Secrets.  Deep, dark secrets.  Secrets that need to be buried.  How deeply can each member of this completely dysfunctional family bury their myriad number of secrets? Their happiness seems to be inversely correlated to how deeply they can bury their common as well as their individual secrets.  Let me tell you, there aren't too many happy members of this family!  This family has more skeletons in their closet than Jeffery Dahmer.  MARIA/STUART could be a psychology class study of repression, depression, delusion, guilt, denial, incest, and aggression.  I'm sure I'm missing a few other diagnoses,  but even with these aspects, this play was funny!  It was an amazing feat to pull off, but the writer and director deftly combined some pretty harsh topics like incest and balanced it with humor.  The farcical aspects were just what the play needed to give it levity.  Without that, MARIA/STUART would have been morose. 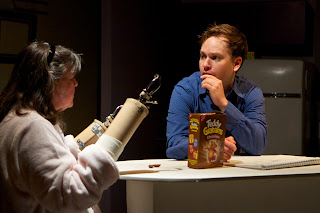 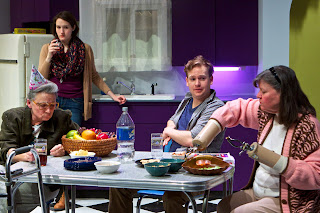 MARIA/STUART was a dark comedy (my favorite kind!) which revolved around Grandma, who resided in a nursing home.  She was visiting her daughter's home for her birthday.  It was clear from the beginning that Grandma was just tolerated for her birthday and that her ramblings about insignificant topics irritated her daughter and granddaughter to no end.  As we were introduced to her other daughters and grandson, we quickly learned about some strange events that each character had experienced, but were unwilling to talk about.  How each daughter dealt with one particular event, a "changling" appearing, affected all of their relationships. 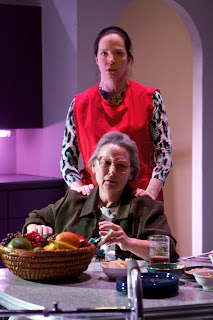 The characters in MARIA/STUART were the extreme of all the personality types.  The three daughters run the gammet from institutionally insane (with hook hands due to "an accident"), to a deeply irate control freak, but outwardly socially accepted, to superficially peachy-lets-put-on-a-smile-and-everything-will-be-fine personality.  Grandma apparently slipped in and out of dementia and/or selective hearing loss and the grandson seemed to have never really grown up.  But there are reasons beyond belief for all of their extreme personality disorders!  Entertainingly appalling reasons!  Even with the extreme aspects of each character, their interactions were typical of many families; this should probably scare me to admit this!  Sisters can be harsh.  Younger people frequently have little patience for the older generations.  And many of us are completely intolerant of those with a handicap.  For instance, imagine eating carrots and dip with hook hands.  It wasn't pretty and this family had no qualms about saying so...no regard for feelings whatsoever.

The bizarre family dynamics and the reasons behind them were slowly uncovered, shovel by shovel, until it was unbearable for some of the family members to see.  As food was tossed, and soda was spilled, so were the secrets of the family.  (Warning: sitting in the first row you may have a grape or two come your way!)  As secrets never really die, we all have coping mechanisms and this completely dysfunctional family utilized every coping mechanism possible.  But who was truly happy?  Sometimes you have to face and recognize the elephant in the room and even talk about it before you can be happy.  Will this family ever learn?

MARIA/STUART was a wonderful depiction of a dysfunction family to the extreme.  The cast was magnificent!  The writing was intense and poignant, but had it not been for the talent of the cast, the words and emotions would have been lost.  The humor utilized when addressing some of the delicate subjects frequently elicited unbelievable laughter.  The awkward moments were many and again, one could only laugh.  MARIA/STUART was a cleverly written play with skillful direction and acting.  I can't remember the last time I have seen such a standout cast!  You'll be appalled, you'll be entertained, and you'll find that your own 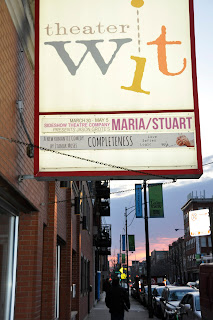 family isn't so dysfunctional after all!  And that, folks, is worth the price of admission.  (You haven't met MY family!)

MARIA/STUART is presented by the Sideshow Theatre Company.  Written by Jason Grote and directed by Marti Lyons, the stars of the show include Nate Wheldon, Scottie Caldwell, Mary Anne Bowman, Ann James, Susan Monts-Bologna, and Jennifer Joan Taylor.  Now playing at Theater Wit, 1229 W. Belmont Ave. in Chicago through Sunday, May 5.  For more information about tickets, go to www.sideshowtheatre.org or call Theater Wit's box office at 773-975-8150.  Tickets are only $20-$25 with student and senior discounts.  Dining with parking is available at Cooper's directly across the street.  Take a night out in Chicago without spending a lot of money and still be entertained!