MOCK YOUR WORLD ROCKED MINE by Pamela Powell 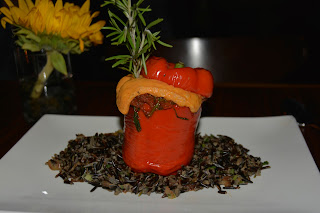 Would you like a night of scrumptious gourmet food followed by a side-splitting comedy review show?  Then 'Mock Your World' at The Stand Restaurant and Comedy Club is your perfect combination.  Rarely, actually never, have I gone to a comedy club and had food that was edible let alone good.  The Stand was the exception to the rule and served freshly made courses with unique subtleties of flavors. You won't believe the gourmet appetizers and entrees available here.  They even had a vegan choice!  Other choices ranged from typical sounding pub food which I am sure is so much more than that, to Tarragon Marinated Chicken Paillard.  Don't worry, you can still get fish & chips as well as burgers and fries.  Although I'd recommend the sweet potato tater tots.  Trust me, they were nothing like your high school cafeteria served!  I would be remiss if I left off one of the accompaniments to dinner and a show: the beverages.  With a decent wine and beer list, The Stand also dabbled in unique and tasty signature cocktails.  I'd recommend The Dice made with local botanical Brooklyn Gin.  On to the show... 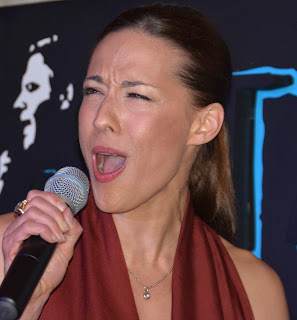 As I was seated at my table, I looked down at the "decorations."  I gazed at the little foil packages in front of me.  No, that couldn't be what I think it is, could it?  Yep.  Condoms. That was clue #1 that I was in for a bit of a raunchy night.  As the emcee took the stage, he warned that all prudes needed to leave.  That was clue #2 that it was going to be a rather raunchy night!  After the opening comedy act, Stanley Bahorek, Lindsay Nicole Chambers, David Perlman and Lisa Rothauser, our four singers/actors/comedians, took the stage in this intimate theater.  Short musical skits which captured life in NYC in the most improper way possible unfolded lyrically on the stage. 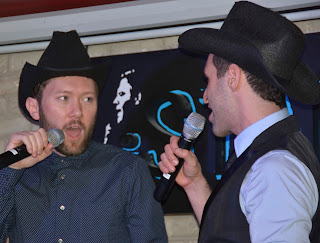 'Mock Your World' started with the topic of how one sweats on the subway.  This in turn created new terms such as "swoobs" and "swalls"  which were belted out with their melodic voices.  (Come on.  Admit it.  We've all experienced swoobs or swalls, but we just don't TALK about it!)  As quickly as the subway derailed you, you were then thrown into "Brokeback Mountain: The Musical." A wide variety of taboo topics were brought to the forefront in song.  Travel onward to 'CHICAGO,' the musical.  New and revised lyrics to a familiar tune now addressed shaving certain body parts.  I may never be able to see 'CHICAGO' again in the same light!  The crisp, clear, and harmonious voices made soiling your pants sound beautiful.  Now that's talent!  I found myself laughing until tears streamed down my face!  The time flew by as the actors seamlessly segued from one topic to another, not missing a beat, and completely entertaining the audience.  This comedy review show covered issues from being a mom to hookups, straight or gay, to bodily functions...many topics that each of us could relate to, but we would never have the audacity to actually talk about them!  However, 'Mock Your World' put those topics right out there for everyone to see and hear with no embarrassment and no remorse. 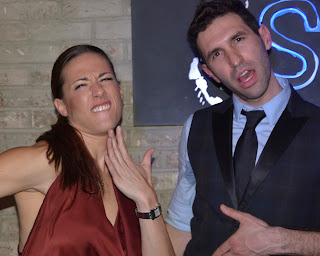 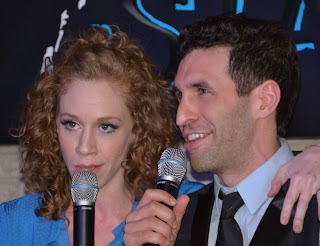 'Mock Your World' was a jaw-dropping, hilariously inappropriate comedy review show with talent I would expect in major theatrical productions on Broadway.  The catchy and cleverly written music and lyrics by Andrew Byrne crushed politically correct statements and "proper" behavior.  However, I must say that this was all done in the most amusing and riotous way! As this venue was cozy, there wasn't a bad seat in the house.  This zany, topical musical comedy review show is one for all to enjoy...that is unless you are a prude!  Seriously, you have to be open-minded to some pretty raunchy topics.  This show rocked my world!   If you love to laugh, you are going to love 'Mock Your World!'

'Mock Your World' is playing every Thursday evening now through June 6 at The Stand Restaurant and Comedy Club, 239 3rd Ave., NYC.  Make reservations for dinner before the show.  http://www.thestandnyc.com/cocktails/ 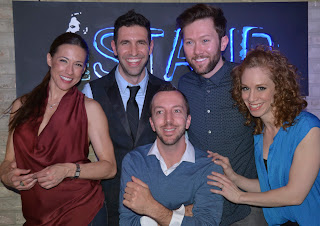