TRANCE WILL MESMERIZE YOU by Pamela Powell 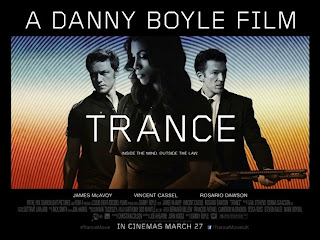 "Trance" is a psychological thriller starring James McAvoy, Vincent Cassel, and Rosario Dawson, directed by Danny Boyle.  For those of you unfamiliar with Mr. Boyle, he is responsible for several amazing films such as "Slumdog Millionaire," "Trainspotting," and "127 Hours."  "Trance" was immediately reminiscent of the movie "Memento" (another favorite of mine) starring Guy Pearce who questions what's real and what's not.  "Trance" has similar nuances as the question of memory is also in play.  McAvoy played Simon, a criminal who utilized his connections with an art auction to double cross a crime boss and steal a valuable painting.  Things go awry and Simon ends up with a head injury which blocks his memory of the location of the stolen painting.  Needless to say, the crime boss, Franck (Cassel) is none too happy and we watch the complicated story unfold from this point.  A hypnotherapist is hired to figure out where Simon has hidden the painting as the torture technique didn't work.  He truly can't recall where it is. 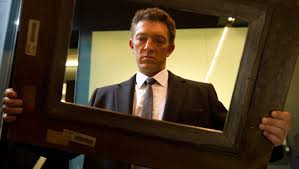 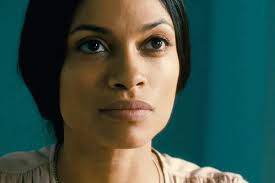 "Trance" was mind-blowing.  I was mesmerized from the moment I saw the opening scene.  This fast paced yet deliberate movie gave me only the necessary information to process what the director and writer wanted me to...no more and no less.  It was like fitting pieces of a puzzle together, bit by bit, finding a piece on the floor that you knew was missing, then squeezing it in where it belonged only to find another piece still in the box.  It truly wasn't until each and every piece of the jigsaw puzzle was in place, and you stood back, did you really know what happened in the end.  Wow!  This intense movie was captivating stylistically, cinematically,  as well as psychologically.  The characters were developed to the extent that you needed them to be only when the writer wanted you to know them.  The timeline was somewhat fractured, but not to a point of confusion.  This timeline overlap made it clearer and more interesting.  You did have to pay attention, though.  You did NOT have time to get up and go to the bathroom like the homeless woman who sat in front of me did on numerous occasions.  I felt sorry for her...not because she was homeless, but because she missed the entire gist of the movie!  Hopefully, she was movie hopping and could catch those pieces at a later showing.  (Please note here that I do NOT condone movie hopping!) So the plot and story were spectacular and unexpected, but I bet you are wondering about the acting.  It equals every other aspect of this movie.  Rosario Dawson, Elizabeth, chosen for many reasons that will be clear at the end of the movie, was amazingly convincing as the hypnotherapist hired to help Simon recall where he might have placed the $25.7M (pounds) painting.  Simon (McAvoy) was the boy next door that had a problem making good decisions and just fell deeper and deeper into a hole that became a suffocating abyss.  Franck (Vincent Cassel) and his crew could have been a mob in an country, wreaking havoc on disappointing slackers. 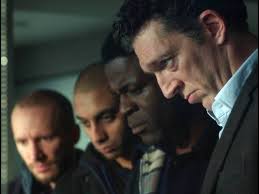 "Trance" was a violent movie, but not over the top.  There were scenes that made me cringe, but this was all to add to the credibility of the movie.  I was glued to the screen.  I didn't want to miss a thing for fear of not being able to figure out what the puzzle would look like at the end.  This movie played with memories; the real and the imagined.  It played with how the brain worked.  It made you think.  "Trance" was a mind-boggling psychological thriller with drama, love, sex, and violence.  It was also smart.  What more can you ask for in a movie?