BEFORE MIDNIGHT AN ENCHANTING FILM by Pamela Powell 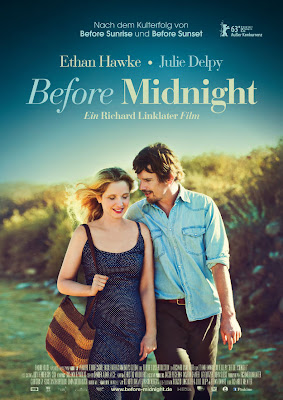 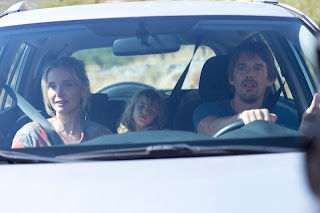 I was lucky to see this film as it premiered at the Sundance Film Festival this year.  Truly, one of my favorite films of the festival, I have been anxiously awaiting its release for all to see.  "Before Midnight" was the third installment in the life of Jesse and Celine starring Ethan Hawke and Julie Delpy.  In 1995, "Before Sunrise" began their journey of life together in their chance meeting and impulsive decision to exit a train bound for Vienna.  "Before Sunset" picked up in 2004 to show us how their lives continued and the changes that occurred.  In "Before Midnight," Jesse and Celine are now 40-something, traveling on vacation with their two young girls, and experiencing life as all of us 40-something married couples do.  I hadn't seen the first two films prior to seeing "Before Midnight," but it wasn't necessary. The writers, Delpy, Hawke, and Linklater, gave you enough information in the dialogue to catch you up  quickly. 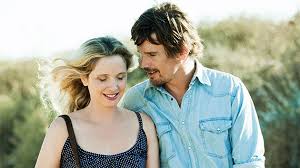 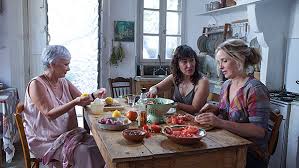 "Before Midnight" was a beautiful movie set in Greece.  9 years have passed since many of you saw them in "Before Sunset."  They had 2 beautiful daughters, left relationships behind and lived in Europe.  On holiday, as they say abroad, the family traveled through Greece.  We, the viewers, had the luxury of traveling with them as the continuous filming shot of the drive was spectacular.  The walks along the beach and through towns made me feel as if I was a third wheel tagging along behind the couple, experiencing everything that they were experiencing.  As they dined with friends in a pristine country table with vistas I can only imagine, I too was sitting at the table, wanting to take part in the natural ebb and flow of conversation.  The conversation of this film is what made it truly a remarkable film.  It was natural.  It was a realistic response to many topics of conversation which have taken place in my own home.  The dialogue could have been directly lifted from many of our homes.  I could completely relate with Delpy's character and could see how my husband might view me and my responses.  (Oh, dear...I feel kind of sorry for him now!)  Within this realistic conversation, there was also so much humor.  I laughed out loud and laughed so hard that I had tears in my eyes!  The film took twists and turns, literally and figuratively, to give you a complete picture of how Jesse and Celine's relationship has evolved or even devolved over the years. 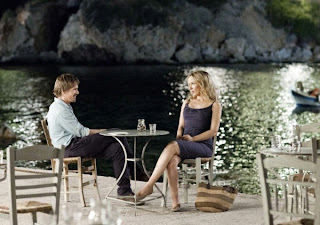 "Before Midnight" was all "just a conversation."  But what a powerful conversation it was!  Realistic, honest, open, heart-felt, conversations about not just Jesse and Celine's relationship but of others in their circle as well.  The movie touches on topics of life and death, priorities, males vs. females and their roles within a relationship, sex, passion, body image, body changes, and so much more.  As Celine looked for answers to life from her elders, I was completed absorbed by the words of wisdom I heard.  I left the film truly touched and fulfilled by what I had not just seen, but experienced.  Again, the location was bewitching (I need to book a trip to Greece!), the style of the film with continuous shots simply spellbinding, and the writing was captivating.  Delpy, Hawke, and Linklater performed perfection together with "Before Midnight." 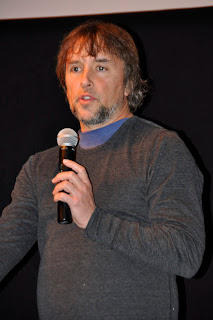 In the question and answer segment after the film, Mr. Linklater joked about the next installment of the movie series in about 9 years...what would it be called?  "Early Bird Special?" I'm thrilled that I can look forward to seeing how Jesse and Celine are doing in 9 years as they seem to follow my aging as well.  I highly recommend seeing this film whether you have seen the first two or not.  If you're married, have kids, and in your 40's, you are going to love it!  If you've seen the previous two films, you have got to see this new addition!  It's not often that we have a film that is natural, realistic, relatable, and entertaining..."Before Midnight" is all that and so much more!