THE GENIUS OF MARIAN: A FAMILY PORTRAIT OF ALZHEIMER'S by Pamela Powell 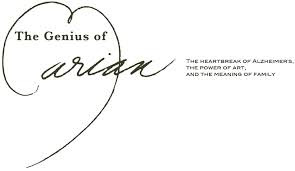 Dementia, in all its many forms, touches the lives of everyone.  Whether it's Alzheimer's, Parkinson's, or Lewy Body Dementia, we all know of family members or close friends who have had to watch the sad progression of this disease.  The type of dementia that most people aren't aware of is Early Onset Alzheimer's which affects people under the age of 65.  It comprises only 5% of the diagnosed Alzheimer's patients.  "The Genius of Marian" chronicles just this disease and how it affected Pam White and her immediate family.  Giving insight to a disease from a patient's and family's perspective can better educate care givers, doctors, and give comfort to others going through similar situations.  "The Genius of Marian" is one of the first documentaries to touch upon the effects of the disease from a personal perspective. 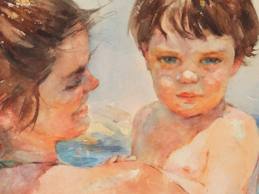 Pam White had a remarkable beginning to her life.  Her mother, Marian Steele, was an exceptionally talented artist.  Pam's childhood was reminiscent of the book Madeleine as she spent many of her younger years growing up in a luxurious hotel.  When things changed with her parents, so did Pam's life.  Her mother poured herself into her art, leaving little time for her daughter.  Pam grew to be a beautiful model and acted in commercials.  As this chapter of her life closed, she then received her degree and became a social worker.  Pam's children were her focus as she balanced both career and family.  After retiring in 2008, she decided to write a book about her mother, Marian, who had died in 2001 at the age of 89.  Marian had been diagnosed with Alzheimer's Disease.  As Pam began writing , she began to exhibit significant memory problems.  The doctor then diagnosed Pam with Early Onset Alzheimer's Disease.  She was 60 years old. 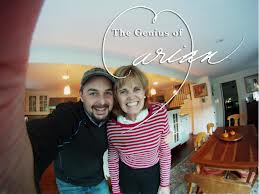 Over the next three years, Banker White, Pam's son, chronicled the family's journey with Pam and the effects of Alzheimer's Disease.  This disease does not just affect the one with the diagnosis; it affects the entire family as well as friends. Over the three year period, Banker captured events in the family's life both big and small. He showed how his mother began to deteriorate in completing simple tasks like setting the table or getting dressed.  These routine tasks became too overwhelming for her. What was most significant about this film was the candid expressions from all of the family members about Pam's disease, including Pam's own thoughts. Pam discussed her disease and her abilities openly with her son.  Her thoughts changed over the years as the disease progressed.  Pam's husband's and children's responses truly represented the pain and anguish of watching the deterioration continue, but their love for Pam superseded all of that. 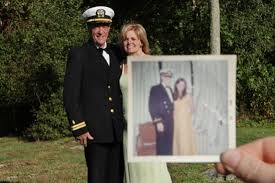 The film was enlightening from a first person's perspective of the disease.  It was also a beautiful movie which included photos and film footage from the past.  We were able to see Marian and her stunning paintings.  We saw Pam as a youngster as well as a young adult modeling and acting in a commercial.  We saw many parts of what made Pam the person she was.  Interviews with Pam's friends gave you the full sense of what kind of person Pam had been to those around her.  Pam stated that she is still so thankful for being able to continue to spend time with her family and friends..."it's all good...no regrets." 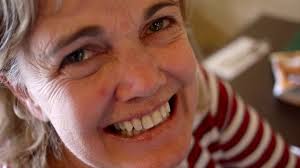 Banker did not initially set out to make a documentary about Early Onset Alzheimer's Disease.  Originally, he just wanted to record information to help his mom complete the book she had started.  Banker stated that, "...my mom and I were able to connect by remembering Marian, someone we'd both loved and had lost to the disease that was now affecting my mother."  As the conversations progressed, Pam "began to share the complex emotions related to what she was going through."  One of the most striking portions of this movie was Banker's conversations with his father.  Pam and her husband had a wonderful relationship and continue to, however the roles are changing.  Banker felt that doing this project has enabled him "to be a better son with patience."

Banker hopes to bring "The Genius of Marian" to educational institutions.  In fact, "Marian" has already been seen in the Neurology Department of a university to educate soon-to-be neurologists.    The story is not yet complete. Pam and her family have a long road ahead of them.  This will be a life long project for the entire White family.  Perhaps through the Whites, with their creative and enlightening production of "The Genius of Marian," more people can understand dementia and how to be a better son/daughter/doctor/caregiver with patience.