STAR TREK INTO DARKNESS EXPLODED WITH ACTION by Pamela Powell 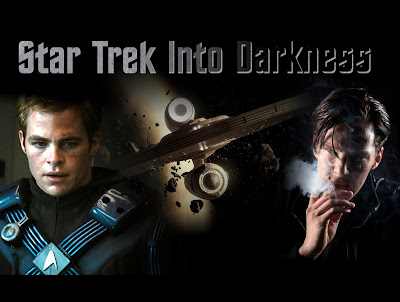 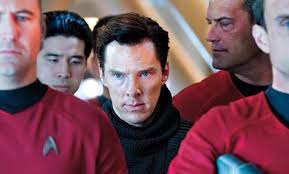 Here's my news flash:  THIS IS NOT A CHICK FLICK.  I know, I know.  Shocker, right?  It's not just because they just HAD to have the hot chick in a black bra and undies in one scene.  This "hot chick," by the way is the very talented Alice Eve who I had the pleasure of seeing in her new film with Stanley Tucci, "Some Velvet Morning."  She was an amazing actress in that!  Back to "Star Trek." It's not that I love seeing all "chick flicks" either.  I like action flicks, intellectually stimulating films, totally base level humor films (sometimes), as well as thrillers, docs, and lots of other types of films.  "Star Trek Into Darkness" (brace yourselves, Trekkies) just didn't thrill me.  Maybe it was because I am a female.  Maybe it's because I am not a huge Star Trek fan to begin with.  No, you won't see me at any conventions dressed up like a Klingon.  However, I used to watch Star Trek on my little black and white TV utilizing a pair of pliers to change the channels and aluminum foil on the rabbit ears to get better reception.  I'm really not that old.  I just grew up in an isolated little town in Western NY State.  Anyway, I remember watching episodes with Capt. Kirk, Spock, Scottie, and all the rest.  I knew what was going to happen in each episode, but I still enjoyed watching the interactions between the characters.  There was always going to be a crisis.  There was always going to be a bad guy.  There was always going to be a fight.  There was always going to be some humor.  And Capt. Kirk was always going to save the day.  Even back then, I thought the fights were hoaky, but I didn't care.  I also didn't care about the special effects because, let's face it, we didn't really have special effects back then.  Beaming someone up was good enough for me.  Now we have lots of special effects and well-choreographed fight scenes to make it seem more authentic.  Those two aspects alone should make "Star Trek" even better, right? 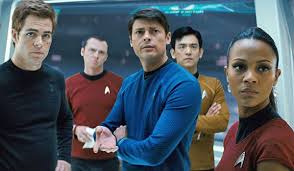 The Starship Enterprise continues on...or did we go back in time for this one?  I don't know.  I guess it's the young Kirk and Spock, but then why did I see the old Spock on the screen and he spoke of how he defeated Kahn (Ricardo Montalban!  I remember these episodes!)?  Maybe I should have watched the previous "Star Trek" movies beforehand.  I'm confused with the timing, but alas, I don't think it really mattered.  For those of you unfamiliar with the "Star Trek Into Darkness" premise, here's my version:  A young Capt. Kirk (Chris Pine...oh how I love those blue eyes and his role in "Unstoppable!") and his first officer, Spock, along with their crew took risks which jeopardized the ship and its mission.  The resulting punishment for Capt. Kirk's poor judgement lead to another reckless endeavor as he fought Kahn and others to save the day.  OK.  According to that, it sounded like a typical episode, right?  In theory, yes, that would be correct.  However, JJ Abrams had a different flair to this "Star Trek" 2 hour episode.  From the beginning, it was visual and auditory bombardment with chasing and fighting scenes.  I, at times, felt like I was watching a James Bond movie with fights occurring on movie spaceships and jumping to catch the one beneath it...not a train as in Bond, but a space ship.  There was relief with some of the comedic achievements of Simon Peg as Scottie.  In fact, at one point when he was running and running on the enemy's ship.  "Run, fat boy, run," was all I could think!  I'm not even going to go into who played which character.  If you really want to know, go look it up on imdb.com.  The rest of the characters looked quite similar and for the most part, acted like their 1960's version counterpart.   Now, here is where even I take issue with the two main characters.  And remember, I am not a huge Star Trek fan so I can just imagine how you people feel!  Spock cried.  Yes, he shed a tear.  Come on!  The Vulcan in him cannot do that!  Even I know that!  And then we have Capt. Kirk saying he's scared!  NEVER!  Capt. Kirk would never say that!  NEVER! "Star Trek Into Darkness" I am sure will be a huge success because of just what it is.  That's fine.  It just wasn't my cup of tea.  For those of you young, single people out there (Guys, I'm talking to you!), don't take your date to this one unless she suggests it.  She will be yawning within the first 30 minutes and she'll want to head home after the movie...without you.  Married couples?  Well, let's see...my husband is on his computer right now and I'm on mine.  That being said, guys, gather your buddies and go see this if you're a Star Trek fan.  Then go out for some pizza and beer.  Bring home some flowers and a bottle of wine for your honey and you're that much better off!  You can thank me for my advice later.  Cheers!