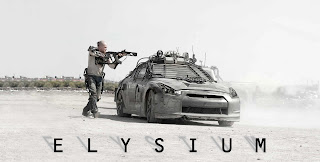 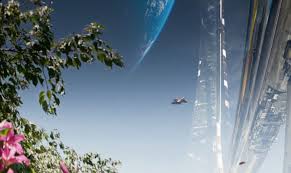 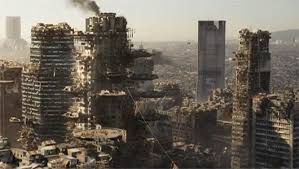 It seems that besides super hero/comic book movies, we have end of the world movies this year and ELYSIUM fits this second category.  Neill Blomkamp has written and directed this futuristic thriller starring Matt Damon and Sharlto Copley. Blomkamp's name is known primarily for the movie "District 9" which also delves into science fiction as well as social injustices.  Copley seems to be the common denomonator between the movies.  With the harsh judgement of calling this film a socialism movie, can one just sit back and enjoy it?  Read on to find out.

ELYSIUM is set in the year 2154 where the Earth is overcrowded, diseased and chaotic.  The dark, dirty, and dingy people scrounge for food, beg for health care, and are monitored by robots and those above.  The rich, beautiful and healthy people live in a bubble (or at least a ring) located in Earth's atmosphere.  These people control everything on Earth and live a peaceful life similar to that  of the rich and famous.  This contrast in life-style make the oppressed inhabitants of Earth want nothing more than to reach Elysium, become a citizen, and be healthy.  When Max is exposed to lethal doses of radiation at his pathetic job, he has only one choice:  go to Elysium to be healed.  Getting there is much easier said than done and his success could change the world. 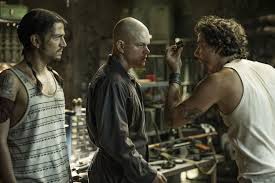 ELYSIUM is an apocalyptic, high action thriller typifying what everyone's perception of the future will be for Earth: dark, dirty, dingy, diseased, and difficult.  Dreading yet another one of "this" kind of movies, I didn't have my hopes up for any entertainment.  I was wrong.  The story hooked you with introducing you to the main characters as children.  Had we have been introduced to Max just as an adult, the connection and caring would not have been there.  Max and Frey were best friends in an orphanage vowing to go to Elysium when they grew up.  Years later with much history behind them, the two meet again.  Max, not the citizen of the year, but still a character you like, finds himself with 5 days to live.  Given that information, he has nothing to lose trying to get to Elysium.  The intensity of the film was at nuclear level from the moment Max was shown as an adult.  Impending doom, explosions, bad guys, special effects and chases happened continuously to get your blood pumping.  The film was gruesome in parts, but all appropriate to the story.  With all of these aspects of the film constantly bombarding your senses, it still was able to tell a story and develop characters that were interesting. 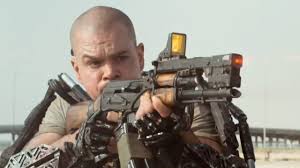 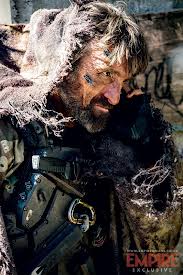 Damon's character, Max, was initially a selfish, but humorous man in a world devoid of happiness.  His  self-serving attitude, however, is what helped him survive this inhospitable world.  Damon deftly depicts this seemingly empty soul and gives it life.  He's occasionally funny and ironic while still pulling off the tough-guy persona.  Sharlto Copley is the epitome of evil in looks and actions, although I found it difficult to understand his accent.  What was disappointing was Jodie Foster's performance as Delacourt, Secretary of Defense.  Her waxing and waning British or upper-class accent (I couldn't distinguish the two), was obvious and irritating.  It sounded like she was trying too hard to sound elitist and bad-ass all wrapped into one.  It didn't work.  The rest of the cast seemed to fit their characters wonderfully and believably. 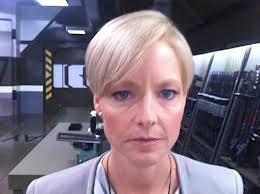 "Elysium" is an intense futuristic thriller that will keep you glued to the screen and on the edge of your seat.  Its violence is quite intense and disturbing, but it is keeping with the overall film.  The story works.  I even think Blomkamp had the perfect ending; a feat not usually accomplished in Hollywood. I'm not going to go into the supposed political statements.  To me, it is a story that is intriguing, exciting, and action-packed.  If you want to see this movie as a form of entertainment and you enjoy high intensity films, go.

Starring Matt Damon and directed by Neill Blomkamp, this futuristic thriller takes on a ruined earth where all the lowly dregs of humanity live and the wealthy and healthy (but not necessarily wise) have escaped and live in the beautiful man made Elysium, floating in Earth's sky.  When the overcrowded Earth