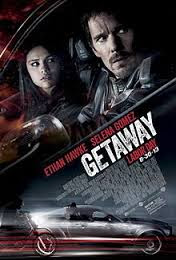 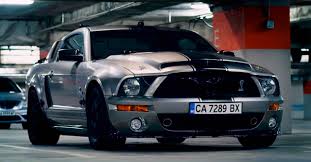 I drive like a grandma.  Or at least that's what my kids tell me.  That's usually not what the cop says that pulls me over on the highway though.  In any case, I am not a speed demon.  I don't take chances.  I don't even like passing on a two lane road.  I would rather go 50 in a 55 than risk passing.  Why do I tell you this?  Because GETAWAY was my chance to feel what it's like to be behind the wheel of a race car on city streets.  GETAWAY was a typical car chase movie where the lead character, Brent Magna, a former race car driver, finds his wife kidnapped.  He must literally race against time to accomplish tasks in his car in order to save his wife's life.  Ethan Hawke and Selena Gomez are the two prime stars trying to give a little bit of life to a typical chase and crash movie. 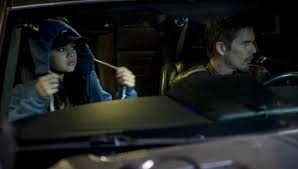 Brent Magna's wife is kidnapped.  He is instructed to find a particular car and drive.  Instructions to follow.  During his drive, a girl, but not just any girl, tries to steal the car at gun point.  Turns out that this car, a Shelby Super Snake (for all you muscle car fans out there!) was actually hers.  She was just trying to get it back.  As luck would have it, "the girl" is now in on the rescue mission.  The two work together in high speed to save "the other girl." 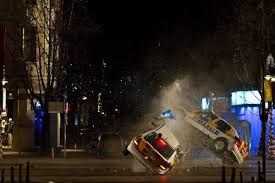 Let's face it.  This isn't an intellectually stimulating film.  If you didn't realize that going in, well, then there are other issues at hand.  This movie is exactly what you expect it to be.  It's a car chase movie.  There are good guys and bad guys.  The good guy does some questionable things which makes him a little bad too.  In the end, it's just a car chase and car crash movie.  What might make this movie a little better than your typical chase movie is the entertaining, albeit unbelievable, banter between Selena Gomez' character and Ethan Hawke's Brent Magna. The most amazing star of the movie, however, is the camera work.  There were many times, especially at the end of the film, that I felt as if I was actually in the front seat, racing through the streets in Bulgaria, running redlights and nearly missing accidents left and right.  Throughout the film, unique and seemingly impossible camera angles had you in awe. 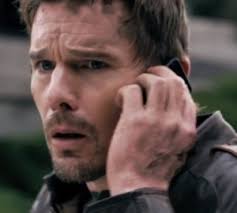 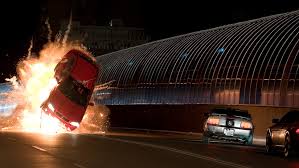 I hate to categorize movies into male and female, but I'm going to...this is a guy movie.  It's Need For Speed on the Silver Screen.  If you're ok with 90 minutes of car chases and stunts and a difficulty in knowing how and when to end a movie, then you'll like GETAWAY.  Otherwise, ladies, go see BLUE JASMINE or families, go see THE WAY, WAY BACK.