THE BOOK THIEF STEALS YOUR HEART by Pamela Powell 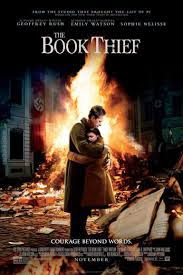 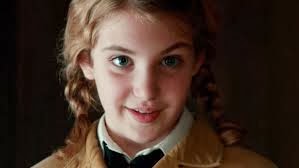 "The Book Thief" hits the silver screen after much success in book form.  Written by Markus Zusak, the novel has been a part of thousands of book clubs across the nation.  Now Michael Petroni adapts the story into what looks to be a successful screenplay.  “The Book Thief” is a  story of survival, love, sacrifice, and risk.  With a strong cast consisting of Geoffrey Rush, Sophie Nelisse, and Emily Watson, the film takes on its own life, telling a sad, yet somehow comforting story of a young girl's courage and strength as she is surrounded by death.

Taking place during the height of WWII, the film follows the book closely to set the scene.  Narrated by Death, as it is in the book,  we see  Liesel’s ability to survive and even thrive during this horrific time period.  As she witnesses the death of her brother and soon after is abandoned by her mother, she must somehow assimilate into her new family.  With a harsh, no-nonsense "mother," she finds kindness and acceptance with her new "father."  It is his tenderness and nurturing  that helps Liesel to learn to read.  Death is intrigued by her genuine love of learning to read and "stealing" books.  This intrigue pushes Death to go against his better judgement and become attached to Liesel, following her life. Death is in awe of her determination in every aspect of life which helps Liesel not just survive, but to thrive.  As she becomes attached to this family, she finds a best friend, and learns about the atrocities of not just war, but Germans and Jews during WWII. 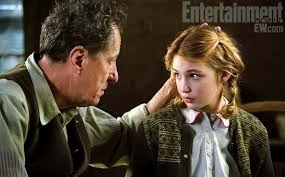 "The Book Thief," although revolving around death and being narrated by one and the same, is a very sweet and tender story.  The story isn't all happy and loving, as you might guess.  As it takes place in Germany during WWII, the unspeakable crimes against humanity that occurred are most certainly addressed in the film, but not to the extent that is visually disturbing.  It sets the tone, gives you the information, but doesn’t bring it to the point of unwatchable.  The point is still taken and understood which makes the film more palatable than other films set during WWII.  The focus of the film is seen through the eyes of Liesel.  "The Book Thief" tells a beautifully sad story with heart and compassion.  Although the story moved slowly at times, it still captivates you, anticipating what happens to each person.  The characters are fully developed as you find yourself caring about each of them.  The sadness is overwhelming, but there is still hope and a life lesson to learn.  The movie comes full circle and captures life and its meaning for this strong young girl full of life, love, and a passion for reading. 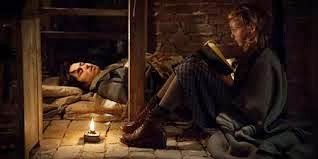 Although this German family certainly isn't the typical family, Geoffrey Rush and Emily Watson are perfectly cast as they seem to be lifted from the pages of the book.  Rush, an endearing older father with a twinkle in his eye, expresses a complex character who, on the surface, is just a simple painter.  Once again, Rush is outstanding in his role.  He brings life and depth to this seemingly ordinary man.  Emily Watson, the gruff, stern mother has a heart of gold.  Watson's ability to portray a woman who hasn't had an easy time of things is uncanny.  Initially, she seems offensive, but in time, Watson gives you just enough with her smile or her lingering look to let you see inside to her soul, rendering this outwardly unyielding character to become soft and real.  It's hard to believe that there could be another standout in this film given Rush and Watson's performances, but Sophie Nelisse embodied the character of Liesel with the skill of someone much older.  Nelisse carried the film skillfully, capturing sentimentality with a strong spirit.  The family became a true family before your very eyes.

If you've read "The Book Thief," you will certainly enjoy the film and comparing the two.  If you've not read the film, see it for its own merits.  Although somewhat slow at times, it is  a compelling story set in Germany during WWII about a little girl who through love, passion, perseverance, and a little luck finds the meaning of family.  The unique perspective of Death as the narrator gives THE BOOK THIEF a  distinctive twist.  With a strong cast and a dedication to keeping the script close to the book, this is an inspiring movie appropriate for all ages.