FOCUS FORWARD FILMS COULD CATAPULT YOU TO FAME AND FORTUNE! by Pamela Powell 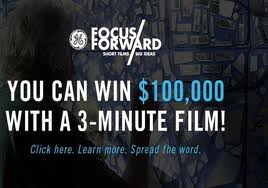 Have you been sitting back, enjoying summer, sipping your glass of wine and procrastinating completion of the short documentary that could put $100,000 in your pocket!  NO WORRIES!  Focus Forward Films has extended their deadline to October 7, 2012.  (Cheers!)  Together, Cinelan and GE have been bringing us quality documentaries, 3 minutes in length, that have positively impacted our world.  Now, they want to give filmmakers around the world (or maybe in the Chicago area!) the chance to win an unprecedented amount of cash as well as another $100,000 in prizes for your talents.

Cinelan, a corporation whose co-founder is Morgan Spurlock, and GE have teamed up to create Focus Forward Films.  Their motto is "Short Films, Big Ideas."  That's it in a nutshell.  They want  to make the world a better place utilizing film.  And it can be done.  During the 2012 Film Festival year, we have been able to see the fruits of their labor with 3 minute educational and entertaining documentaries.  You can learn more in these three minutes than you can in an entire seminar!  Medicine, technology, the environment, safety, health, and our future are some of the many topics addressed in Focus Forward Films.

Go to www.focusforwardfilms.com for examples of previous documentaries.  These are professional-quality, three-minute, end-to-end stories that have a positive impact on society.  Some of my favorites include (but are not limited to!):  "The Invisible Bicycle Helmet," "Robot," "Good Bread," "New Gift,"  "Meet Mr. Toilet," "Newtown Creek Digester Egg" oh, I should just name them all!  They all affected me in a different and positive way and my hope is that more people will take 3 minutes out of their day to be positively educated and enlightened.

If you think you have a vision to share through film, make sure you submit your film before October 7, 2012 at midnight! 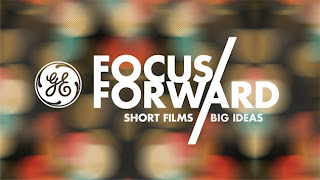 For qualifying information and FAQs for the competition, go to www.focuforwardfilms.com/challenge.  For full rules and submission guidelines, visit http://vimeo/focusforwardfilms/rules.  Further cash prizes, a selection of competition films will be distributed online to a global audience through Vimeo and will sit alongside films produced by FOCUS FORWARD filmmakers on game systems and cable TV, VOD such as Verizon Fios, Time Warner, Sony PlayStation, and AT&T U-verse.

GOOD LUCK!  I can't wait to see the next winner!