The title should have given me my first clue about the violence level of this movie.  My second clue that the violence level was going to be over the top for me was the first scene of the movie.  3 young boys, apparently brothers, challenging the youngest one to shoot a pig in a pen.  Seeing the weakness in this little boy, one of the older brothers completed the deed.  Fast-forward 15-20 years and these brothers are now grown and one of the largest moonshine or white lightning distributors south of the Mason Dixon line.  Beautifully set in the hills of Virginia (although it was actually filmed in Georgia), this Prohibition Era movie artfully depicts what lengths people would go to for liquor and what lengths the law would go to to stop its production. 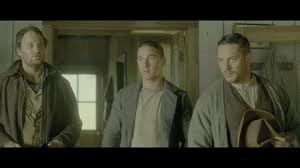 Tom Hardy (Forrest), Shia LaBeouf (Jack), and Jason Clark (Howard) played the Bondurant brothers.  Guy Pearce was the menacingly powerful Special Agent Charlie Rakes.  LaBeouf's character Jack Bondurant, the youngest brother, narrated the movie to give the audience more insight.  These backwoods moonshiners all had different personalities with Forrest's invincibility, Howard's heartlessness with others, and Jack's impulsivity, but these brothers stuck together.  Family was everything.  As the government cracked down on moonshining, Chicago sent in their troops to "the wettest county in America," Franklin, VA.  Pearce's overall look and sinister mannerisms were enough to make people turn away and run.  His ferocious behavior intimidated all but the Bondurant brothers.  This meant war.  And war was had. 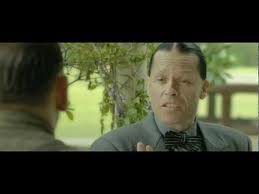 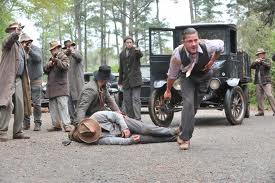 The sheer brutality of the movie with special effects as people's throats were slit sent me to burying my head in my knees.  The power of the story and the dark smokey hues of this depression era movie kept me in the theater.   With the constant feeling of impending doom, I watched as these brothers wouldn't back down.  Revenge with no regard for the law was the common theme.  The writing of this film most definitely made you root for the law-breaker as opposed to the law-enforcers.  We were able to get a sense of each brother's personality and the relationships they cultivated.  These ancillary stories were what gave this movie the depth it needed to make it more appealing than just about running moonshine.  Based on a true story of these brothers, it gave you a glimpse of what it might have been like to live during this time period complete with the poverty of the people and the wealth of those law breakers.  References and small scenes of Chicago gangsters and liquor connections were emphasized as well.  Tommy guns and murders in this little backward town brought a different level of crime to it. 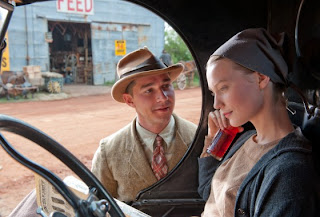 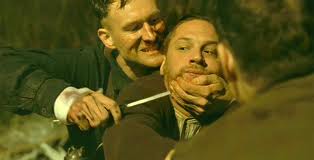 The cinematography, overall setting and feeling of this story was flawless.  "Lawless" was a  well-written and directed story, although I couldn't always understand Hardy's character's speech as much of it was grunting or slurred, you could still feel and see that this was a story of 3 brothers and their commitment to family.  Abiding by the law was not of utmost concern to them as was evidenced not just by the moonshine industry they built, but by the torturous murders that they felt they rightfully performed.  The graphic special effects were disturbing to me, but very realistic.  I can only recommend this movie to you if I warn you of the extreme violence which helps to complete the story.  It is not there just for the sheer shock factor.