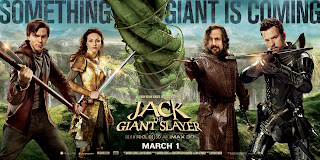 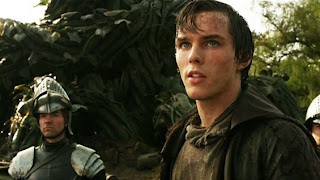 I will admit this.  I seem to do a lot of admissions on this blog site.  It's cheaper than therapy, so it's a good thing.  Anyway, here's my admission.  I really didn't want to go see "Jack the Giant Slayer."  It was either that or "21 and Over" and you couldn't pay me enough money to see that one.  Ok...you could offer me some exorbitant amount and see what I do.  Go ahead.  I will also admit (looks like you're my therapist of the month) that I don't remember a whole lot about the story Jack and the Beanstalk other than the obvious bean thing, giants, and Fee Fye Foe Fumm chant.  But alas, no worries, I was not lost during the film.  I was also surprisingly entertained and hooked in the first 5 minutes before the opening credits rolled. 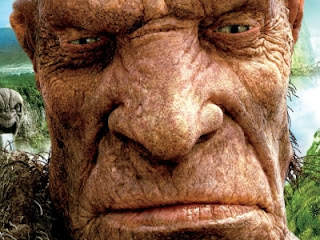 This star-studded cast (Yes, it was star-studded, believe it or not), reinforced "Jack" and all it appeared to want to accomplish which was pure child-like entertainment.  Suspend all belief and be transported back into English folklore and bed-time stories.  Stanley Tucci, Ewen McGregor and Ian McShane magnified the validity of this movie.  Yes, it was still a child's fairy tale, but it definitely was one they can be proud to have been a part of.  It was nothing like "Beautiful Creatures" and Emma Thompson.  Our hero was played by Nicholas Hoult from the recently positively reviewed "Warm Bodies" and our heroine or damsel in distress (Damn fairy tales typifying weak women!) was Eleanor Tomlinson.  Both actors embodied their characters well.    Stanley Tucci can play any role.  In "Jack," he played royalty with suspicious motives.  I loved the denture!  Thankfully, Ian McShane did not drop any f-bombs as his role of King Brahmwell as he typically did in 'Deadwood.'  And that leaves us with Ewen McGregor.  What is it about this guy?  From "Beginners" to "Salmon Fishing in the Yemen" and "The Impossible," he is perfect in any role he plays.  He played our princess's protector valiantly. The special effects and talents of those behind the scenes were truly at the forefront with our Giants and Miracle-Gro vegetation.  I'm not sure what was CGI and what was makeup and camera angles.  Those blurred lines are a compliment on its own. 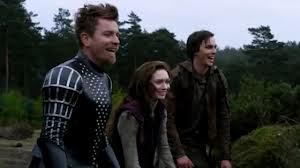 This was an entertaining movie and perfect for a family or kids between the ages of 9 and 15.  It was a fairy tale.  It was also a cute little love story with heros and damsels in distress...everything little girls and boys read about.  Although there was some violence, it was really in the realm of fairy tales scope, so nothing too terribly disturbing.  The most disgusting things were the 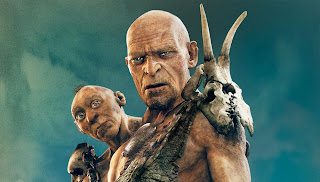 farts, burps, and nose picking/eating...right up any little boy's alley.  Yes, I can say that.  I raised a boy and drove 5 boys to and from soccer tournaments.  There.  Credibility established.