NEVER THE BRIDESMAID IS A LESSON IN LOVE by Pamela Powell 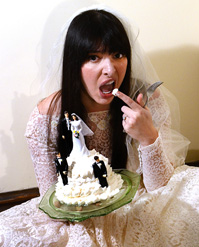 Polarity Ensemble Theatre presented the Jeff Recommended Never the Bridesmaid, written by Chicago playwright Bill Jepsen and directed by Richard Shavzin in their quaint and intimate new location in Wicker Park.  Chicago, as I have stated in numerous reviews, is fortunate to have such quality theater is these charming spaces.  The viewer truly feels a part of the theatrical experience.  Although sitting in the front row made me nervous that I might accidentally have my feet in the way of the actor!  Luckily, last night, the actors came away unscathed from my clumsiness.  But it is in these venues that we truly can experience and feel what the actors want us to feel through the writer's words. 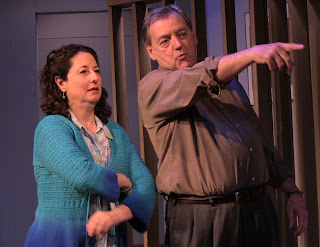 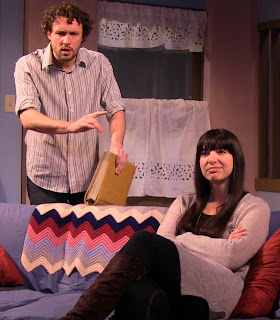 Never the Bridesmaid took a thorough look at love; examining the lives of siblings and their parents.  Maria (Lindsey Pearlman) and Anthony (Nick Lake) are twins who have less than a perfect track record in the game of love.  Their parents, on the other hand, appear to have an ideal marriage and are set to celebrate their 40th anniversary.  What pressure these two feel, trying to live up to and even replicate what their parents have.  Anthony and Maria are both living at home and are in their mid to late twenties.  Nick, ever the scholar, is working on master's degree number two and can't afford to live on his own and Maria, once widowed and twice divorced, well, you figure that one out.  The common theme is "love."  How to find it, how to avoid it once you have found it so you don't get hurt, and maybe even how to keep it. 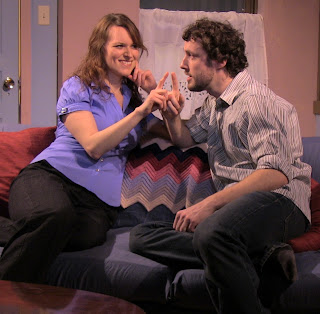 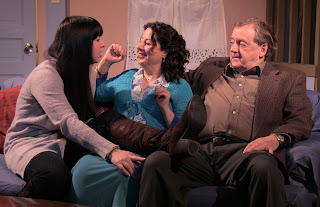 Maria and Anthony were an absolute pleasure to watch on stage.  Maria's animated character enabled the viewer to connect immediately with her.  We believably watched her help her distraught friend through a break up.  We also observed her slightly drunken state during an interaction with her parents and her brother.  She was spot-on with her perfectly written lines.  Her ease and genuine affect in these situations made her real.  Anthony's charm and naturalness lured you in to his character's dilemma as we watched him struggle with having been dumped, yet he still yearned for so much more.  His love or rather, avoidance of love, was tested when he reconnected with his sister's best friend, Kathleen (Kristin Danko).  He tried desperately to build walls around himself for protection, but was that really what he wanted?  I felt so connected with the characters that I found myself wanting to respond to some of the questions.  (Thankfully, I kept my mouth shut!) Again, this is one of the wonderful aspects of these intimate theater settings. 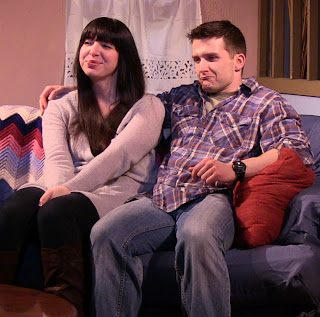 Never the Bridesmaid was brilliantly written to capture realistic conversations about love, relationships, and hope.  Within that framework, humor was a large part of this play.  The father, Elmer (Steve Pringle) was perfectly cast as the 'typical father.'  His inability to get one idiom straight was hilarious.  Anthony's never-ending frustration with this inability just added to the hilarity.  What adult child doesn't have an on-going pet peeve with a parent?  Again, this was completely realistic.  Conversations between all the characters were familiar and could have happened in any viewer's home.  Reality of these conversational exchanges enabled you to more deeply relate to each of the characters.  As Anthony expressed the pain and turmoil he experienced in his last break up, you truly saw his passion.  In that moment, he was reliving the pain.  This realistic environment continued with the relationship between the mother, Doris  (Daria Harper) and Maria.  It was so natural and comfortable that they truly seemed like mother and daughter.  At one point, Maria, feeling sad, snuggled up on the couch with her mom.  Doris pulled up Maria's head to straighten the pillow and fix her daughters hair.  She wasn't extremely gentle, but she was natural.  They trusted one another which brought the level of believability of the play that much higher.  As we got to know each of the characters and their history of love, the stories intermingled and came together to give the viewer a complete feeling of satisfaction.

Never the Bridesmaid, with its creatively entertaining writing and talented cast, was a delight to watch.  Its intimate setting enabled me to be a part of the play; to feel what the actors were feeling and to understand them fully.  Truly, a delightful, engaging and thoughtful play to tell this generational story of love.  Let's be honest here, at the heart of all things, isn't love what we all want?

Never the Bridesmaid runs from February 26 through April 7.  For a complete listing of show times, see their website:  www. petheatre.com.  Friday, March 1 is the gala premiere and on Thursday, March 7 is a post-show discussion. Tickets are under $20 and there are phenomenal restaurants in the Wicker Park neighborhood such as Absinthe Cafe where I dined.
Posted by Unknown at 8:19 AM