SOMEBODY UP THERE LIKES ME ARE WORDS NICK OFFERMAN CAN HONESTLY SAY! by Pamela Powell I'll admit it...I adore Nick Offerman.  The fact that he is from a small town in Illinois that my kids have traveled to in order to play sports makes him a regular kind of guy...relatable.  Then there's the fact that he did local theater in Chicago.  That's just another bonus in my mind.  You all know, if you've read my play reviews, that I love Chicago theater.  Mr. Offerman and I have the same appreciation for the quality "store-front" theater that only Chicago can offer.  He was once a part of that scene in the Defiant Theater before he became "A Man's Man" on televison.  Mr. Offerman now has produced and starred in the soon-to-be released "Somebody Up There Likes Me." 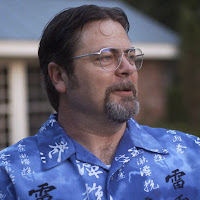 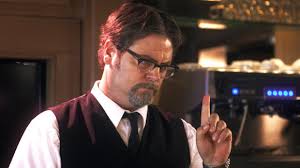 Honestly (It is Reel HONEST Reviews, you know.), I didn't know what this film was about until the end.  It started at the cemetery with Offerman's character, Sal, stating that you can't live forever.  We then were introduced to our other main character, Max (Keith Poulson) who was having some marital issues...that's putting it lightly.  Max and Sal worked together in a high-end steak house as waiters.  Each of these characters' lives became intertwined over the years showing us their bumpy road of life.  Sounds pretty benign with that description.  Where the film comes to life is with its quirky writing and off-beat humor that only Nick Offerman could pull off.  Although the other characters were minor by comparison, they are nonetheless very important.  As with 'Parks and Recreation,' Offerman's wife was in this film as well.  She too personified off-beat humor with her voice, her reactions, and facial expressions.  Words are just a bonus with her humor!  As Offerman stated after the showing, his wife stole the film with just her hair.  It was true.

This movie was quirky.  Truly, it was the essence of quirkiness.  It wasn't a "sit on the edge of your seat" kind of movie, but it was a movie that you had to stay glued to the screen.  It just didn't make sense until the end.  But the end was worth it.  It was one of those 'Ah Ha' moments!  The unorthodox (I needed to find another word besides "quirky!") writing perfectly fit each of the characters.  Each scene was equally balanced with words and actions to tell the story.  And the humor was (let me go to my thesaurus) wacky and peculiar (I love my Mac!) which was right up my alley.  This unconventional (yes, I'm still on the "quirky" thesaurus page) film was fun, light, funny and a pleasure to watch.  I liked the fact that I didn't "get it" until the end! 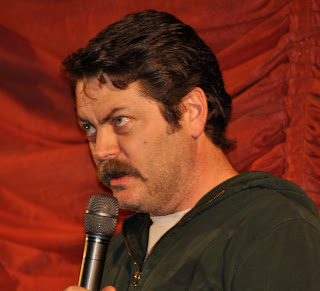 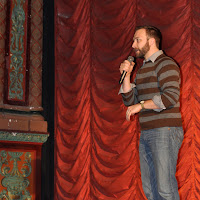 One of the best things about this screening was that it was at Chicago's Music Box Theatre.  Mr. Offerman reminisced fondly about his time in Chicago and this particular theatre.  Offerman took questions from the audience and continued to amuse and amaze the audience.  It was fun to hear him laugh at his own jokes in a laugh I wouldn't have anticipated coming from this "Man's Man."  It was adorable!  In being this "Man's Man," it was heart-warming and refreshing to hear him talk about his wife, Megan Mullally.  He stated, "That lady is my hero."  Wow!  How many husbands talk about their wives with this much adoration.  It's true.  He is a "Man's Man!"