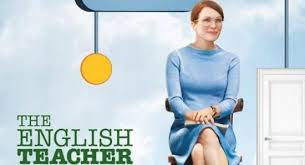 "The English Teacher" had a very recognizable and respectable cast with Julianne Moore, Greg Kinnear, and Nathan Lane.  This film premiered at the Tribeca Film Festival just last month.  When considering films at Tribeca, my mind goes directly to "indie" films.  But when an "indie" film utilizes known actors, to me, it makes it less than "indie." That's just my opinion. 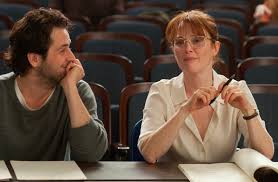 Julianne Moore played the wonderful and beloved high school English teacher, Linda Sinclair, who happened to have never married or had much of a social life.  It seemed that her standards (and dreams) were just too high.  She compared everything with a book and romanticized life accordingly.  Therefore, she ended up a "spinster." She kept to herself and lived a regimented and predictable life, that is until she re-encountered a former student.  This brilliant former student, Jason Sherwood (Angarano) had fallen upon difficult times with his play not being produced in NYC.  The storyline evolves and revolves around this play and the teacher-former student relationship...in very predictable ways. 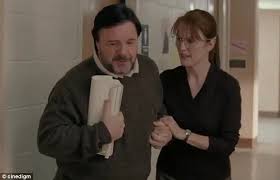 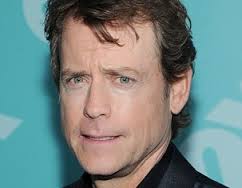 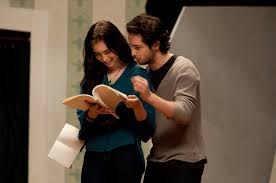 "The English Teacher" was a movie that capitalized on the star power which meant it could slack on the story power.  Julianne Moore was fine.  Nathan Lane was his typical over-the-top drama teacher.  Greg Kinnear was the grounded and handsome father.  I truly loved seeing him on the screen...I think it's the blue eyes.  Yes, it's definitely the blue eyes.   I'm guessing that all of these actors walked in to the studio, filmed their bits and breezed on out of there.  Snap!  Done!  Regarding the story, it was  predictable.  The characters were one dimensional and predictable.  It really would have been better as a "made for tv movie."  But alas, with the stars in this film, it had to hit the silver screen first.  Now don't get me wrong...I was entertained by this film even given its predictability.  I laughed.  I chuckled.  I saw humor in the writing and delivery of the lines by this talented cast.  The captured moments of dating life for Miss Sinclair were very funny!  The narrative aspect was also quite creative and entertaining.  All in all, I'm afraid you would be disappointed in paying $10 to see this film.  This "chick flick," however, would be better suited as a rental while having a few glasses of wine and some cheese and crackers in your family room.  You could chat, chuckle, and tell related stories triggered by different lines.  You needn't worry that you missed an integral part of the film because you know within the first 10 minutes of the film what's going to happen throughout most of it anyway.

So skip this one in the theater and wait for the DVD, ladies.  Then go ahead and rent it, buy some Two Buck Chuck and enjoy time well-spent with your girl friends!  Cheers!

This is actually already available on demand through Amazon!  Here's the trailer...