Romance.  To be swept off your feet both literally and figuratively is any woman's dream.  Admit it.  We are all hopeless romantics at heart.  Yes, we all want equal rights.  We all want there to be no glass ceiling.  We want to be treated no differently in any environment just because we are women; except when it comes to love.  Here, in this environment, we revert back to some weird wiring where we want to be adored, showered with affection, and pulled dramatically into the arms of our Prince Valliant.   It is with these unrealistic expectations that you men have to live up to.  Sorry, guys, but Nicholas Sparks understands!  And so did Jane Austen upon which this film is based. 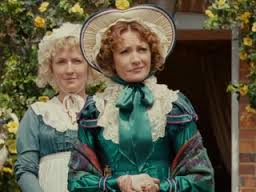 AUSTENLAND stars Keri Russell, Jane Seymour, and Jennifer Coolidge.  Russell's character, Jane, is obsessed to a rather unhealthy level with Jane Austen and her characters in Pride and  Prejudice.  Being "unlucky in love," she spends all her money on a "Lifestyle Changer" of a vacation:  a trip to Austenland.  This gated getaway in England enables the customer to experience life back in the "Regency Era."  The women spend a week living the life and the men who adore them in gentlemanly ways are all paid actors.  All the women are guaranteed to be (pseudo)engaged at the end of the week.  This is Jane's chance to live the life she feels she was destined to live.    Unfortunately, she didn't purchase the platinum package.  She'll find out what the "basic package" buys her. 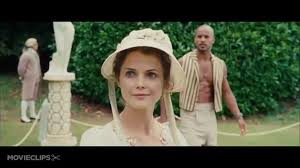 Bygone eras always seem so much more romantic.  The ladies in Austenland got a bit of a taste of the daily drudgery of needlepoint and sitting around a lot.  The pageantry and elegance were most certainly there making this a beautiful film.  But here's the shocker.  This is a chick flick.  Yes, I'm laying out on the line for all of you right now.   Men will go to this film just to appease their female counterparts...you will be rewarded, I am sure.  In any case,  "Austenland" is just a fun, romantic comedy utilized to escape reality.
The story  is a classic love story, but still a pleasure to watch.  Jane meets Elizabeth (Coolidge), another American who is totally clueless about Austen's books.  She's just an over the top, wealthy American who is interested in snagging a man.  Jane and Elizabeth become friends and help each other discover what they need.  But no romance movie is complete without a bad "guy" and miscommunications to muddy the romantic waters.  The blurred lines of reality and fantasy become confusing for Jane and just plain entertaining for the audience.  It's sweet and completely unrealistic which is what makes this film a joy to watch. 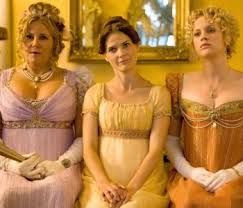 Keri Russell portrays the rather nerdy spinster to a "t."  Coolidge is always spot on in whatever character she represents.  She's over-the-top perfect and seems to have fun whilst making fun of herself.  Yes, I just used the word whilst.  The era is catchy, what can I say?  Our leading men are also a bit over the top, but so much fun to watch!  While Ricky Whittle's character Captain East cant seem to keep his shirt on (that's a good thing), the brooding Mr. Nobly is the epitome of Mr. Darcy.  Bret McKenzie plays the stable "boy," Martin and could make any female swoon. 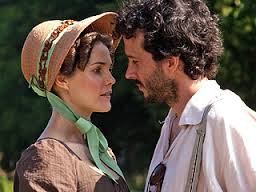 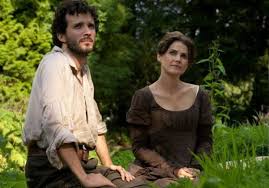 AUSTENLAND is for all of us hopeless romantics (aka females) who want to laugh, sigh, and escape during a movie.  The cast is wonderfully funny, sweet, and a pleasure to watch.

For an interview from the Sundance Film Festival with Keri Russell go to  http://tinyurl.com/lzspcez