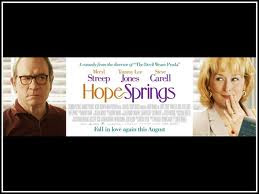 "Hope Springs" was a movie that brought me back to my teenage years, but as you will quickly learn, it was the awkward aspect of my teenage years. How could a movie about an older couple possibly make me feel like a teenager, you ask?  Here's the whole uncomfortable story.  I brought my 89 year old mother to see it.  It was the first movie she has gone to since the release of "Tootsie" in 1982.  I was visiting her in NY and thought she might enjoy seeing a movie.  Given that fact that they usually have the audio up pretty loud,  I wouldn't need to worry about her being able to hear it as she had lost her hearing aids.  I knew that this movie was geared toward the older population and thought it would be a perfect reintroduction to the silver screen. 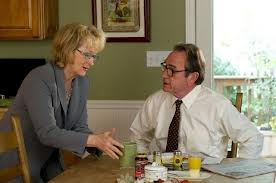 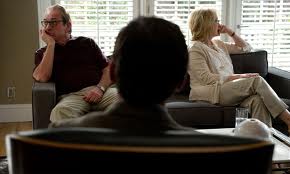 Going into the show, I knew the movie was about a couple who was experiencing marital difficulties.  What I didn't realize was the fact that the ENTIRE movie revolved around the couple's sex life or lack thereof!  Imagine sitting next to your elderly mother who you never really had "The Talk" with and listening to Steve Carrell (the therapist) ask Tommy Lee Jones (the husband) to describe his fantasies in detail or Meryl Streep (the wife) express whether or not she orgasms when she masterbates!  OH MY GOD!  And I won't even begin to tell you the uneasy feelings I had as the couple had to perform homework exercises after each therapy session such as "The Touch Exercise" and we watched  Tommy Lee being massaged until a certain reaction occurred!  Or how  Meryl Streep performed oral sex in a movie theater!  I really can't accurately judge this movie as I was too busy looking at my mother, sitting in the wheel chair next to me, looking for some clue as to whether or not she was grasping what was happening on the 10 foot screen in front of her!  It was the only time during my visit to NY that I was thankful that she had lost her hearing aids as MY hope sprung that she thought Meryl Streep was just tossing and turning in her sleep and not pleasuring herself! 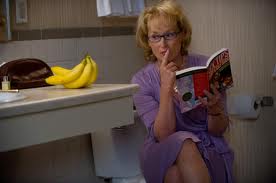 As the movie ended, my mother loudly proclaimed that she liked it!  Several fellow movie goers chuckled and smirked as they heard this comment.  Later that next day, back at the assisted living facility where she resides, she told the nurses about the movie.  She let them know that she "learned a few new things!"  Again, OH MY GOD! 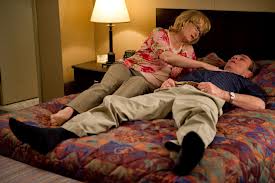 My review of this movie can only be told from my uncomfortable experience.  Your view might be completely different if you weren't there with a parent! I can say that there were some funny parts, but I think most of them were shown in the trailers.  It was a disturbing look at a couple's marriage that has slowly fallen into state of disrepair.  Meryl Streep played Kay who wanted nothing more than to save their marriage.  She was lonely and desperately grasping at anything to save it.  Tommy Lee Jones played her husband Arnold, an accountant, who had given up on sex, communication, and affection and was content watching golfing tips on tv, falling asleep in his recliner, just to repeat the same thing the next day.  Kay dove head first into getting help for them with Arnold reluctantly trudging along.  Steve Carrell played the very serious Dr. Feld, intensive marriage therapist.  Although his role in this movie was important, this role could have easily been played by anyone.

"Hope Springs" addresses what is probably a common theme in marriages. Marriage is work and when a marriage is broken, both parties have to want to fix it.  It also completely focused on the need for affection and sex as a part of a relationship and in this movie, it was a good 90% of it!  Or at least sitting next to my mother, that's the percentage it felt like!

I would wait for the DVD if you want to see it.  BE WARNED!  IF YOU CAN'T SAY THE WORD "SEX" OR "ORGASM" IN FRONT OF YOUR PARENTS, DON'T BRING THEM!