BETWEEN US reviewed by Pamela Powell 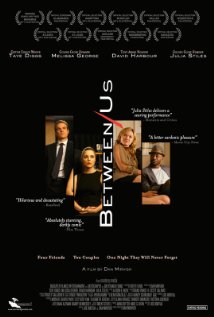 "Between Us" was an off-Broadway play years ago.  When filmmaker, Dan Mirvish, came across this play, he recognized a part of himself in it.  With that personal connection, Mirvish decided to bring this play to the silver screen.  As with any project, this one had its bumps in the road.  Originally planned to film in 2008, the budget just couldn't be supported with the current economic times.  Mirvish placed "Between Us" on the back burner while he completed a book tour for his critically-acclaimed novel "I am Martin Eisenstadt."  If you haven't read this or don't know the premise, think back to the Palin quotes and news leaks.  This fictional character, Martin Eisenstadt, was credited/blamed for those leaks. After the book tour had run its course and other projects just didn't pan out, Mirvish went back to the screenplay for "Between Us."  Utilizing Kickstarter to fund this very low budget movie, Mirvish, his crew, and the dedicated actors worked for next to nothing to complete it.  Mirvish explained that the actors involved in this film were deeply connected to the work and each other.  The actors rehearsed for two weeks prior to filming in order to perfect their performances.  But the actors went beyond that.  While they all stayed at the same hotel, they frequently rehearsed together on their own time.   Even though this cast is different from the original 2008 cast, the timing and "a lot of luck" enabled these four actors to dedicate their time and talents to create this honest look at two sets of marriages. 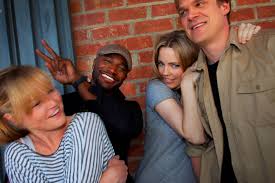 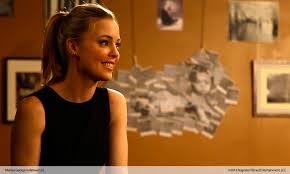 The original playwright, Joe Hortua, and writer/director Mirvish worked together to keep as much of the play's original dialogue and content in the screenplay.  Mirvish did, however, incorporate a bit of himself into the film.  He used his own traumatic situation of falling from a ladder and severely injuring himself as the pivotal point in the film for the character of Joel.  In addition, Mirvish stated that he was wheelchair-bound as a result of this accident and in snowy Park City, Utah...a tough combination.  The character of Joel also can also be seen experiencing the difficulties of snow combined with the use of a wheelchair in a beautiful, yet disturbing visual image.     David Harbour also inserted bits of himself in the film and play as he had the role of Joel on stage as well.  He stated that he graduated from Dartmouth...he truly did.  Perhaps the similarities stopped here with the characters, but that is information that will remain just between them.  The film was about the journey of marriage and friendships.  Although their journeys were dark, twisted, and close to a cliff, there was still the hope that they wouldn't crash. 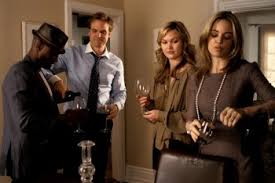 The scenes were simple, the concept realistic.  Two sets of grad school friends, now married for years and living in different regions of the country, reunited for a weekend.  Sharyl and Joel, the midwesterners, had "made it" financially.  They showed off their wealth and what it bought, but Carlo and Grace quickly learned that money didn't buy them everything...happiness was most definitely missing.  The wine was endlessly poured and the acerbic words spilled effortlessly from Joel and Sharyl's mouths. The anger, frustration, resentment, jealousy and even hatred were evident.  As the evening progressed, Sharyl and Joel revealed secrets about each other in hateful, spiteful ways.  Secrets that should have remained just between the two of them came charging to the uncomfortable forefront.   Carlo and Grace felt torn, but wanted desperately to leave.  It was then that we were  quickly transported to a date 2 or 3 years later in NYC at Grace and Carlo's apartment.  Joel and Sharyl unexpectedly showed up.  It was immediately evident that they were not welcomed.  Flashing back and forth in time, the entire story unfolded to see both relationships growing and changing; not always for the better. 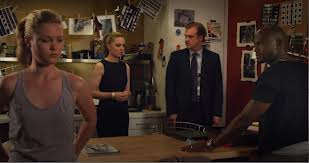 "Between Us" reminded me in many ways of "Who's Afraid of Virginia Wolf."  It  was a tense and powerful film portraying many marriages and relationships.  The reactions and emotions each actor demonstrated were riveting and ultimately believable.  The fast paced, overlapping conversational style was realistic.  Mirvish credited Robert Altman, his past mentor, with the ability to accomplish this.  Not only the style, but the conversational topics were completely possible, bouncing from superficial topics of babies' schedules to intimate thoughts about dashed hopes and dreams.  These couples faced typical problems any married couple could relate to.  Who hasn't changed his life dream, dealt with a colicky baby, experienced financial burdens, or lost passion in a relationship? It's not just the big issues that knock away at the foundation of a relationship.  Chipping away at it with petty issues can be just as damaging.  When a little thing like Sharyl having chosen a bottle of wine from the wine cellar and decanting it without knowing if it was a $20 bottle or a $100 bottle, Joel's sarcastic words sliced through Sharyl like a machete.  You would have thought she accidentally bought the Hope Diamond on her credit card!  Who hasn't made a mountain out of a mole hill in a relationship?  We all have.  (We have Tuesday Wine at my house.  It was an ordinary Tuesday and I wanted a glass of wine.  I opened a bottle of Justin FOCUS not realizing it was $100.  Oooopppsss! I now drink Two Buck Chuck on Tuesdays!)  "Between Us" was a harsh look at the fact that we aren't all Ward and June Cleaver.

The reality of this film, the skilled performances, and the tight script and dialogue made this film gripping.  Marriage can be a rough road full of pot holes, loose edges, and an occasional boulder placed in the middle. Mirvish expressed that part of the take home message of this film is that hope is there, "even when we are at our worst, we still look out for each other." 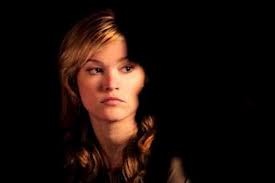 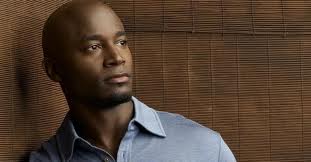 "Between Us" opens Friday, June 7 in limited release.  Wide release and DVD release will follow.  If you're married or have been, this film will hit home.  For some it may hit too close to home!  If you're one of those couples, I might suggest going for dinner before the movie instead of after.  The conversation might be a bit different if you have dinner after the movie!  If you have a perfect relationship, then this might not be the film for you.  I hear there are Leave It To Beaver reruns on just for you!