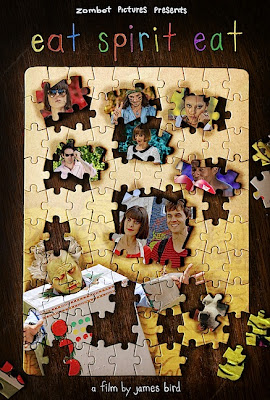 "Eat Spirit Eat" graced the Waterfront Film Festival in beautiful South Haven, Michigan with its World Premiere recently.  Kristin Minter, actress and spokesperson to introduce the film, bubbled over with excitement.  This screening was also the first time the filmmaker and actors would be viewing it on "the big screen."  Her enthusiasm spilled over to the audience with our anticipation of seeing it as well.  "Eat Spirit Eat" was about an orphaned boy, Oliver, who wanted nothing more than for his father to come back for him.  Oliver's father had promised that when he became a movie star, he would come back for him.  That promise was made before Oliver's mother died and was held on to until he had become an adult.  With the help of his foster siblings that came and went in his early life, Oliver set out to see if his father would keep his promise.

The movie started at the end as Oliver narrated his current dire circumstances.  The situation looked tense with police surrounding him as he got out of a car with what appeared to be war paint on his face.  As the movie went back in time to explain how Oliver got to this place, the pace and overall feel of the movie took on an entirely different characteristic.  It became lighthearted and whimsical.  We watched Oliver grow up.  We were introduced to the his foster mother and foster siblings who were all very unique individuals.  Oliver had made a pact with each of them, promising that they would help him make his father a movie star so that he could come back to Oliver. This sweet, charming, and eccentric movie incorporated an eclectic group actors to portray these orphans.  From the indian-mexican kid to the pompous, pretentious brat and every character in between, these now grown "kids" helped Oliver, the sweet and lovable glass-is-half-full kind of guy find his father and help him fulfill his promise.  The film weaved in and out of various situations as if following a treasure map to the big red "X."

Oliver needed to find a producer to help him set up a film for his father to star in; therefore making Oliver's dad a success.  Vera and her twin sister Vill were just the two coffee shop owners/dog walkers to do this.  Having "seen over 250 movies,"  this automatically made them experts in the field!  Each aspect of movie making 101 was covered with each foster sibling having just that skill to help.  With the whole gang in collaboration of making this movie, “hiring” Oliver’s dad to play this strange role in this bizarre pseudo-movie began.  What exactly is a Zombot?  You’ll find out when you see this movie!

The entire cast of "Eat Spirit Eat, delivering their quick-witted lines, was superb.  The story was sweet yet unpredictable which was engaging.  Utilizing vibrant colors, exaggerations in every category, yet keeping to a touching story, enabled the film to be a success.  “Eat Spirit Eat" was a truly sweet story about belonging, family, and a search for a father.  The sincerity of the feelings one might have in search of one's father were interspersed in this otherwise lighthearted, feel-good, humorous film.  The pace of the film with quick.  The colors of the clothing and backgrounds were striking and almost cartoonish.  The style of speech from Vera was staccato and overarticulated which made it so fun to listen to!  All of the characters were an over-exaggeration, but this just added to the fun of the film.  The story took time to develop so that we cared about Oliver and all the other characters; even the father.  The ridiculousness of many of the situations just endeared you to Oliver and his circumstances even more.  This story had heart as well as humor; a wonderful combination. 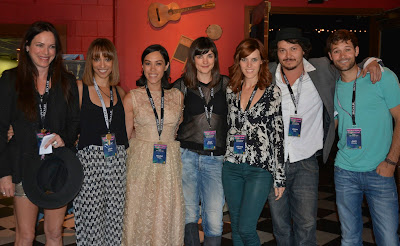 As the credits rolled and the lights came up, the audience’s applause was overwhelming.  Comments such as, “I loved it” were heard several times.  The cast and filmmaker took to center stage to answer questions from the audience.  The smiles on their faces were infectious.  James Bird, the writer and director, shared with us that he never knew his father which was the impetuous for making this film.  Several other actors in the group shared that their relationships with their fathers were either non-existent or not ideal.  One of the most touching stories concerned the producer and composer of the film and her father who lived in Russia.  Sadly, he was dying of brain cancer.  During the filming, he passed away.  Knowing that completion of this film was his daughter’s dream, he left the money for them to do so.  And that is truly a father’s love.

Please watch the trailer at the link below...
EAT SPIRIT EAT TRAILER