AMERICAN HUSTLE A MUST SEE by Pamela Powell 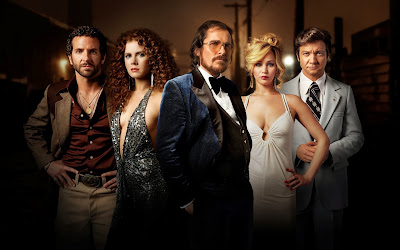 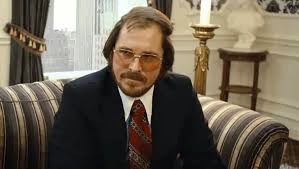 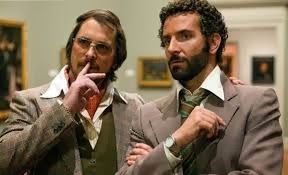 David O. Russell reunited and blended his talented casts from THE FIGHTER and SILVER LININGS PLAYBOOK for yet another creative, smart, and captivating film.  As the film came into focus, the words "Some of this actually happened" appeared.  Although I have no recollection of the

events as I was busy learning to dance The Hustle and listening to Elton John during the late 70's, I love the fact that they didn't say, "Based on a true story."  Hey, let's face it.  Every movie could be "based on a true story."  Even ANCHORMAN 2 could be based on real life.  It is, after all, about how news became "what the people wanted to know and not what they needed to know."  But I digress.  "American Hustle" is about a con artist who falls in love (oh, the women are always the men's demise) and chooses the wrong man to hustle, an undercover FBI agent.  This agent busts the two and forces them to work for the Bureau or they will go to jail.

Let me start by telling you a bit about the premise of the film.  Irving Rosenfeld (Bale) and Sydney Prosser (Amy Adams) meet at a party and fall in love.  The two realize they are cut from the same cloth and team up to build their illegal enterprise of scamming people.  Their success stops as they hustle the wrong guy.  Richie DiMaso, a wild-eyed FBI agent makes a deal with the couple to work for him, making 4 busts and then they will have earned their freedom.  Little did Rosenfeld and his girlfriend know that DiMaso had some issues that would affect his judgement.  What DiMaso deemed as "passion" others might categorize as manic or some other psychological disorder. The scam to entrap Congressmen, Senators, and even Mob bosses quickly spirals out of control.  How the three work together (or against each other) is the focus of the movie. 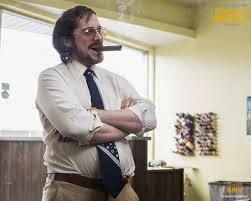 "American Hustle" is superbly written.  What movie could take a story about conning people who are desperate, and marry it with the intriguing tale of ice fishing (You have to see it to understand this comment!) and make it work?  It is creative, interesting, and captivating to the point of not daring to take your eyes off the screen for fear of missing an important detail.  Every word, phrase and sentence is important in figuring out who was truly the good guy and who was scamming whom.  And the "characters" in this film are realistically over the top.  I know that sounds like an oxymoron, but it's not!  Have you been to Jersey in the 70's?  The dialects, hair styles, and interactions are spot-on entertaining, but truly believable.

Traveling back to the late 70's and early 80's was a scary endeavor before I saw the film.  Let's face it, the style of the day was not too flattering.  Trust me, I have photos from high school to prove it.  This film, however is provocative as it blends the style, music, and overall feel of the time period to tell this tale of crime.  The incorporation of classic music by Blondie and Elton John and the humor of Louis C.K.'s character interacting with DiMaso was priceless.  (I also think I still own hot rollers like the ones in Amy Adam's hair!) 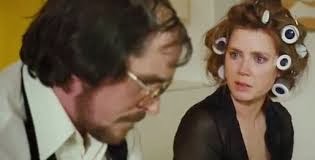 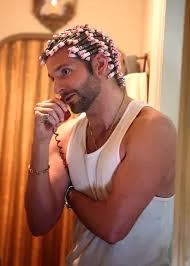 "American Hustle" couldn't have been any more entertaining and at 138 minutes (that's 2 hours and 18 minutes, folks...1 hour past my usual attention span), it held my attention every step of the way.  I'd like to say there were standouts in this film and focus on one or two actors, but I can't because they were all standouts!  Bale seems to have no qualms about not looking so great in a role.  His fat, hairy belly with extreme comb over hair was jaw-dropping intriguing.  Bradley Cooper spent quite a bit of screen time with perm rods in his hair while he roller-coastered his emotions with his mother, FBI boss, and his co-workers.  Cooper's skills as an actor continue to amaze me.  Then we have Amy Adams.  If I ever meet her, I never want to cross her as her scene as a scorned woman was very intimidating!  She was beautiful and raw in her emotions as I have never seen her.  Jennifer Lawrence nailed the role of the Bronx housewife who was bored and neglected.  Her character added such fun at her own expense.  The list goes on and on with talent, but I think that these actors, no matter how talented they are, couldn't have had the performance they did without the direction of David O. Russell.  Now that's talent.

"American Hustle" is a smart, clever, and wonderfully entertaining film about crime around 1980.  This is one of the best written films to hit the screens this year.  Not only is the writing outstanding, but the acting, directing, and style of filming is beyond comparison.  Go see this film in the theater.  It is worth every dollar you spend!