PHILOMENA
Starring: Judi Dench and Steve Coogin
Written by:  Steve Coogan and Jeff Pope
Based on the book "The Lost Child of Philomena Lee" by Martin Sixsmith 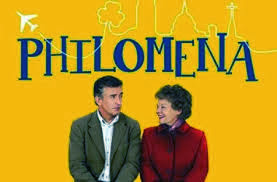 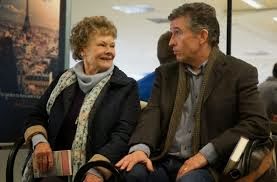 I'm going to go out on a limb here and predict at least one more nomination for the Oscar race.  My first was the obvious Sandra Bullock for "Gravity."  I'm also going to toss in Judy Dench for her character,    in "Philomena," but also the entire film for its story.  Philomena captures the essence of the true life story of an Irish woman whose son was taken away from her and adopted into an American family.  After years of searching and hiding this fact from her family, she looks for help to find her long lost son.  This help comes in the form of Martin Sixsmith who happens to be in between journalistic jobs.  The movie covers the emotional roller coaster ride of a mother's love and pulled, but never severed connections between a mother and child.  This journalist travels along a journey he could never have predicted.The journey that this once successful, but now struggling  journalist  travels, finds more than just a "human interest" story. 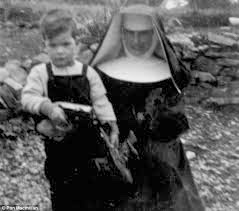 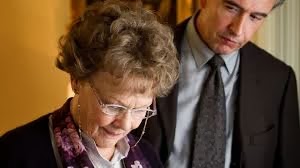 Philomena is a young teen who ends up pregnant and living in a convent to bear her child.  She is an outcast in her father's eyes; and her mother has passed away.  Taking place back in the mid-60's, and therefore having no one to turn to, she now is a servant at the convent to repay her debt of staying and giving birth there.  She must stay 4 years and work as they deem appropriate.  Meanwhile, every mother and child there must endure the possible separation as prospective adoptive parents pop in to pick a child for their family.  Philomena's son is one of the many who are whisked away with no information as to his whereabouts.  The nuns, through the years, have claimed ignorance and kept the two from knowing each other.  This is just one of hundreds of similar stories.  Martin Sixsmith, former BBC reporter, tells this individual's story.

Judi Dench's character was the most realistic portrayal of a mother I have witnessed.  She appropriately slid between being embarrassed of her situation as if she were still that little teenager to the timidness of a mother wanting to know, but afraid to know the truth.  Her character was sweet and tender and somehow, through her unfaltering belief in God and the Catholic religion, she was never angry.  Even in situations that we would all most likely be beyond angry, you could still understand her steadfast belief system.  Her remorse in her life already lived haunted her, but she also embraced her current life.  I felt her pain; I felt her sorrow; and I felt her love without ever having experienced what she did.  Dench has always portrayed characters wonderfully, but this performance is beyond any other actor's scope.  Dench is one of the most powerful and skillful actors on the screen.

Steve Coogin, known more to me as a comedian, took this serious role, added touches of heartfelt humor to it, and ran with it.  He was the yin of Judi Dench's yang.  The two almost seemed like mother and son by the end of the movie given his reactions, not just verbally, but with his body language as well.  Coogin was the perfect support to give Dench even more depth and believability as Philomena. 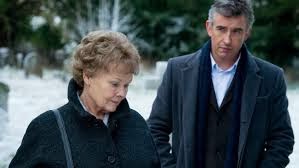 I could go on and on about this film that I had the pleasure of seeing at the 49th Annual Chicago International Film Festival.  It is in my top 10 list of the year.  Even after seeing this film almost 6 weeks ago and writing no notes while I watched, I am still on the verge of tears with how this film touched me personally. Through tears of sadness, relating, and some happiness, an entire package of tissues was necessary.  A mother's love is never severed, just missing in action.  Never judge as you may not have the full story.  And be sure that in life you grasp and hold strong onto whatever makes you feel like you belong.  I'm in tears now.  See this film.  That's it.