Sandra Bullock and George Clooney star in this adrenaline producing film about a crisis situation in outer-space.  When an accident separates them from their destroyed ship, they must work together to survive.  Directed and written by Alfonso Cuaron, this film tackles not just outer-space, but the human psyche as well.  The 3D filming is an absolute must to fully experience this film. 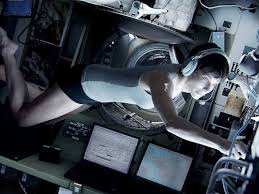 Dr. Ryan Stone (Bullock) is a medical engineer with about 6 months training by NASA.  She and Matt Kowalsky (Clooney) and a small team are repairing a space station when Houston lets them know there is unexpected debris coming their way.  As the team scrambles to abort the mission and get to safety, they are stranded as safety isn't to be found.  Kowalsky attempts to tether himself to Stone and come up with a survival plan.

"Gravity" is intense from the very beginning.  The camera work and 3D effects enable the viewer to experience the same visual disorientation that the characters appear to feel.  To say that Dr. Stone and Kowalsky had a bad day is an understatement.  At every turn, their luck seems to be nothing but bad.  The story isn't without humor, though.  Kowalsky seems to be the calm, cool, and collected one of the pair always knowing just what to say to get them through the situation at hand.  Dr. Stone is quite the contrast to Kowalsky, but both of them look for inner-strength to make the right decisions.  As the two are stranded, they learn about one another. Their stories are intriguing, especially Dr. Stone's as the horrors of space bombard them.  Oxygen is precious and gravity is necessary.  When either is not available, the consequences are extreme.  The story and the perils of space intertwine to bring us into the world that few have experienced. 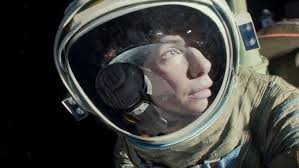 Sandra Bullock's performance is of Oscar calibre.  She masterfully carries this film with intensity and believability.  She pulls you into her head and heart, enabling you to feel her every emotion.  Your own breathing will change as she endures one catastrophe after another, yet never losing hope.  She's strong, but is she strong enough?  She's smart, but as Kowalsky said, "It's not rocket science."  Clooney's role, decidedly smaller, yet just as important, brings levity and calmness to the film.  Constant stress and anxiety don't produce entertaining films.  Kowalsky brings the balance this piece needs to make it not just entertaining, but gripping.  With the filming technique that was used to give the illusion of zero gravity and moving with no friction, the movie succeeds in this capacity as well.  You believe they were truly in space.  It actually feels real. 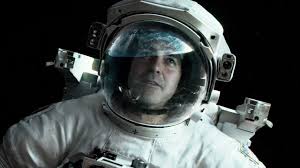 "Gravity" is a wonderfully creative story of survival.  It delves not only into the perils of space exploration, but also into the strength, courage and character of the astronauts.  It is a beautiful, yet horrific story with emotional pull that draws you into every moment.  Bullock is spectacular as the lead, carrying the film with deft skill.  With amazing 3D filming, writing, directing, and acting, this is a must-see film.  A simple plot with wonderful complexity.