INSTRUCTIONS NOT INCLUDED by Pamela Powell 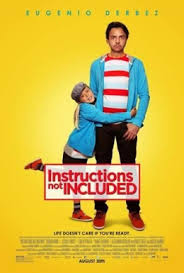 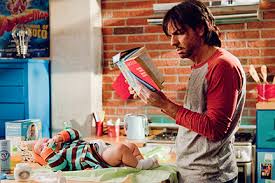 Oh, if only instructions could be included, I know my life would be a bit more stress-free.  Instructions for what, you ask?  Why, raising children, of course!  There are manuals for everything from coffee makers to computers, to digital cameras and everything in between, but when it comes to kids, every kid is different and every family is different.  If instructions were delivered along with the baby, I could have avoided many errors in child-rearing.  But alas, my children will probably go on to require therapy during which time it'll all by mom's fault.  It always is, you know.  In any case, not only have I been a less than perfect parent (I lose the Mother of the Year nomination by January 3rd of every year),  so it is the case for Valentin in the new indie film, "Instructions Not Included." 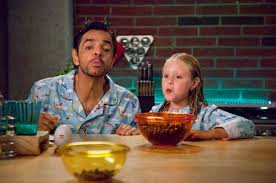 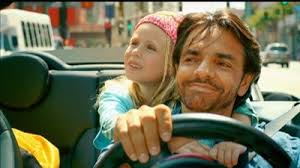 Valentin is a ladies' man.  When I use the plural of this noun, I truly mean it.  He lives in Acapulco, not really having a job, but seems to enjoy whatever the young, beautiful girls can provide for him.  The number of women he is with is mind-boggling, but Valentin is happy.  He lives each and every day for what it is.  Valentin has perfected the lines that women want to hear.  But one day, his "eternal love" shows up on his doorstep with a baby in tow.  His baby.  She hands the baby off to him with a diaper bag and goes to pay the cab, except she keeps going, and going.  Valentin is in a pickle.  He needs to return this baby to her mother as he isn't ready to be a father.  His father tried to teach him to be fearless, but the exact opposite occurred.  As he travels back to L.A., he finds a certain connection to this little girl, Maggie, that he never thought imaginable.  The father-daughter match are an unlikely pair, but she becomes quite a precocious little girl under his watch. 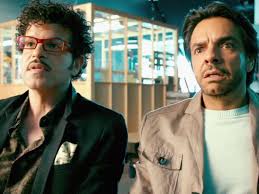 Valentin wouldn't be nominated for Father of the Year, but he has the love of a father which always makes up for other "mistakes."  His father attempted to make him Brave, but that didn't work...or did it?  The imaginative aspects that the viewer is privy to gives us so much insight to Valentin's thoughts.  The creativity in story-telling just adds yet another level of fun to the film.  "Instructions Not Included" is an absolute pleasure, at times a bit corny, but sweet to watch.  Valentin and Maggie's relationship is one that any father and daughter would be lucky to have.  When mom returns to the playing field, things go a little haywire.  "Instructions Not Included" now delves into custody issues, but it never loses the comedic value or the sweetness of the main characters. Is this a predictable film?  Sure, to some extent, but there is one part that you won't see coming.  Bring your tissues as there won't be a dry eye in the house.

"Instructions Not Included" is a fun, sweet story about a father and daughter getting to know each other and trying to be brave.  Their love is portrayed in a beautiful way, yet the film is a bit over-the-top in acting.  If you can get past that aspect and just enjoy the fun, laughter, antics, and heartfelt story, you'll be glad you watched it.  Again, here's my final warning:  BRING TISSUES!  Oh, I almost forgot.  It is primarily in subtitles, but you really forget this because you are so involved in the film.