Once again, the Sundance Film Festival was home to the premiere of another heartfelt film, "Touchy Feely."  This thoughtful and sincere film starred Rosemarie DeWitt, Ellen Page, Allison Janney, and Ron Livingston, cuts through the superficial levels of who we are and shows us how one family heals itself from within.  Directed by Lynn Shelton who also is responsible for the success of "Your Sister's Sister," candidly answered questions about the film, its actors and script prior to the unveiling of the film.  Creating a safe and comfortable environment for the actors was of utmost importance to her.  The actors all concurred that these factors enabled them to perform to their best abilities.

Abby is a massage therapist who suddenly has an aversion to touching people.  Ironically, at the same time, her brother who is a failing dentist, seems to have acquired a healing touch.  As the story unfolds, details from their past as well as information about their psyche is revealed.  These factors directly influence what they are currently experiencing.  Intertwined with these career changes are life factors that create people we care about.  Abby and her boyfriend try to figure out where their relationship is going and Abby's brother and niece try to find out if their lives can grow or will they stay stagnant.  The interactions among family members are touching.  The natural and comedic effects of Henry, a high school friend, and the Reiki Master, Bronwyn, just add another wonderful level to this well-balanced film.
Rosemarie DeWitt proves once again to be a powerfully talented actress in this film.  There is no question as to what she is feeling and why she is feeling that way without her uttering a word.  The audience is completely connected to her and her situation.  Josh Pais plays Paul and is the perfect representation of a dentist.  He is smart, sweet, and quirky, but not the best businessman.  His humor is a little off, but you love him because he is so endearing.  (I can say all this because I am married to a dentist!) 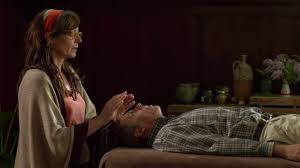 You want nothing more than for Paul to be happy.  Ellen Page plays Paul's teenage daughter struggling with helping her father reach his potential while trying not to ignore her own future.  Her miscommunications and good heart paired with typical teenage girl reactions (again, I can judge this as I have one of those too), make this odd family quite typical and believable.  Allison Janney is one of my all-time favorite actresses as she has such talent and range.  This was a different type of role for
Janney as she explained in the panel discussion at Sundance.  She appeared to be quite comfortable and competent in this calm and reassuring role as Reiki Master.

"Touchy Feely" is a unique and cleverly written film which is endearing as well as entertaining.  Its humor and touch of reality is refreshing with a heartfelt take-home message about our power from within to heal.  Ms. Shelton shared that with the script of "Sister," the majority was improvised.  This was not the case with "Touchy Feely."  Although while you watch the film, it feels so natural it could have been improvised, it was not.  The directing and acting was so spot on that it just made it feel that way.  You will not only laugh out loud in this film, you will sigh and have empathy for each and every character. 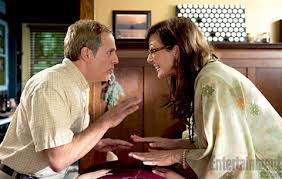