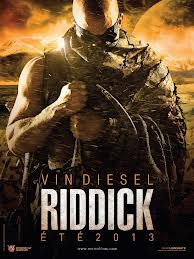 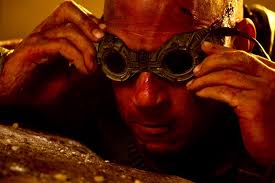 “Riddick” opens today as the third installment of the trilogy of films.  Whether or not it will be a part of a quadrilogy most likely depends upon box office numbers Monday morning.  What?  You haven’t seen the first or second films, “Pitch Black” or “the Chronicles of Riddick?”  No worries because I have taken one for the team and watched the first one which hit theaters back in 2000.  To get you up to speed before spending your hard earned money on “Riddick,” let me give you a brief synopsis.  A ship traveling through space carrying a variety of passengers including a convicted felon, Riddick, crash land on a rather inhospitable desert planet with three suns.  When a solar eclipse occurs and all goes black (thus the name, Pitch Black), strange creatures tear the small group apart, literally.  Riddick and the others must work together to save themselves. 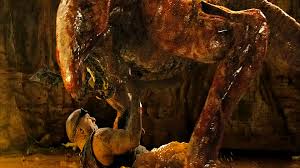 Now as we fast forward to 2013, the film begins and Riddick gives us an historical run down to get us all up to speed.  He also gives us an early prognostication stating that “...there are bad days and legendary bad days...”  With that introduction we see the perils that he must fight on a daily basis just to survive.  The strange creatures that range from hyena-like dogs to a water-loving scorpion-type of velociraptors that threaten him at every intersection. Riddick then gives us more information about the man he has become.  You see, he has become “civilized” which could ultimately be his demise. 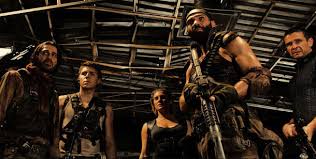 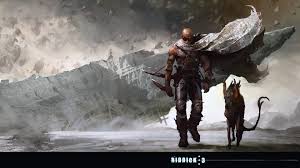 “Riddick” is a predictable and wearisome sci-fi horror flick.  It’s attempt at telling a story to engage the viewer truly borders on the ridiculous.  Riddick’s aforementioned civility is the filmmaker’s effort to make us root for Riddick’s survival and ability to conquer all.  Strangely and almost comically, this story takes a sweet, yes, sweet, turn and becomes a story about a man and his dog.  You realize immediately that there will be an “Old Yeller” moment at some point.   After watching Riddick perform grotesque self-surgeries, outwit the scorpion-velociraptors, and flex his muscles quite literally at just the right camera angles for just the right amount of time (it was that obvious), he then must fight the human bad guys who are hunting him.  The group is quite similar to the first group from “Pitch Black.”  There’s a blonde female, Dahl, and a guy who is religious, Luna, among the group. The blonde, however, is one tough cookie and she happens to not like men.  That seems to be a senselessly emphasized point that bordered on offensive as the film suggested that Riddick could change who she was.  We then are subjected to the overly dramatic pose that Dahl takes whenever the camera catches her. Placing one foot and hip out, thrusting her large chest forward and with a turn of her head, she raises an eyebrow and pulls back her lips in an absurd snear.  This happens several times which makes it quite silly.  I could almost hear her say, “I am woman, hear me roar!”  The film bounces back and forth between Riddick fighting humans and creatures.  But the very clever Riddick is always one step ahead, as expected.  After interjecting the Matrix-style of fighting into the film, it just becomes fight after gruesome fight.  “Riddick” is a typical sci-fi horror flick.  Unfortunately, there are no gasps or surprises, just utterances of, “Yeah, I knew that was coming” and “Is it over yet?” 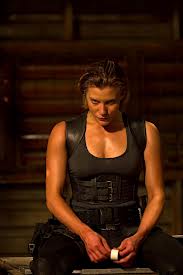 To Riddick’s credit, the gruesome scenes with special effects are well, quite effective.  Riddick also has the “cool factor.”  Only Riddick could pull off these stunts.  If they could have made it more tongue and cheek, the humor would have made this film enjoyable.  The first film actually had more of a story to it.  The saying should be, ‘First time’s a charm.’  Again, my thoughts on sequels are that they shouldn’t be made.  But then again, my bank account doesn’t look like Vin’s, I am sure.

If you are a “Riddick” fan, this is a film you will see no matter what the reviews say. The CGI special effects have improved since the last two films, but the story is really just the same.  If you aren’t a “Riddick” fan, save your money and your time. There are plenty of other wonderful films to see this weekend.