RUSH TRULY IS ONE by Pamela Powell 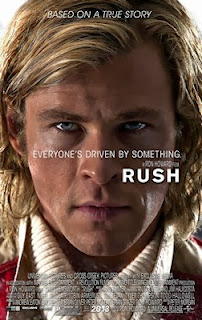 “Rush” captures the true story of two Formula One race car drivers, Niki Lauda and James Hunt, during the mid 1970’s.  This was a time in racing when cars were described as “bombs on wheels.”  Safety was not first and foremost, but speed and winning were.  Niki Lauda, posed to be the world champion, made one wrong choice.  He raced on a wet and dangerous track consequently resulting in a devastating crash that would change his life.  The world now awaited the final race between the two drivers to determine the true champion. This isn’t just a story about racing; it’s a story about integrity and motivation.  Everyone truly is “driven by something” and James Hunt and Niki Lauda find out what their driving force is.

From the beginning of the film, we know that there is a brutal and horrific crash, disfiguring Lauda.  We also know that the two race car drivers are destined to have a final race.  For racing fans, you know the result.  For the rest of you, it’s still a story to unfold.  The final race isn’t what the film is about, though.  The movie then takes you back six years before the crash to give you an in-depth look at each of the racers and who they truly are.  These two men couldn’t have been any more different.  Hunt, the handsome and charismatic British playboy who lived fast in all aspects of his life on and off the track, clashed directly with Lauda, an Austrian with determination, rigorous discipline, focus and unfaltering ambition.  With the two opposing personalities comes entertainment as fans love to see the competition and antagonistic behavior.  Both drivers had the same goal, but they both struggled tremendously with how to attain that goal.

“Rush” is an adrenaline producing film. You don’t have to be a race fan to find yourself clenching your teeth at every bend in the road as the tires screech and the vehicles careen out of control.  Your feet will attempt to hit the brakes, but it’s no use.  The story’s speed and intensity bring you along for this fast paced film so put on your seat belts.  With Lauda’s pompous and unlovable personality and Hunt’s love of living life to its fullest, the constant opposition is enjoyable.  Each driver’s disposition and makeup is clearly defined enabling you to have empathy for both of them, even though they are both quite obviously flawed, yet lovable.

Hemsworth is the star of this film with his engaging smile, confidence, and fun-to-be-a-bad-boy attitude.  He is a true presence on the screen, dwarfing anyone around him.  Daniel Bruhl looking uncannily similar to the real-life Lauda,  plays him with expert precision.  He’s pompous attitude and unemotional portrayal as an outcast shows that he just can’t play well with others.---he has no edit mode and he doesn’t care, yet there’s more to him.  This is where Ron Howard’s directing ability comes into play.  You see so much more to this man.  You root for him as much as you root for Hunt.  Two polar opposite men, but both with qualities you admire.

Given that “Rush” is based on a true story, it becomes an even more intriguing one.  Formula One racing is not for the faint of heart.  Back in the 70’s, you had a 20% chance of not coming out of the race alive.  “Rush” captures that reality and triumphantly tells a remarkable story about two men---two very different men who had the same goal.  What motivates each of them to reach that goal changes throughout the film and you see how that in turn changes who they are.  You don’t have to be a race fan to enjoy this film.  You just need to enjoy a sincere story capitalizing on heart, determination, and drive.  This 123 minute film will fly by faster than a Ferrari or McLaren at Watkins Glen.  With the graphic injuries, sex, and nudity, I would recommend paying heed to the R rating.