GANGSTER SQUAD: REPETITIVE WITH NO SURPRISES by Pamela Powell 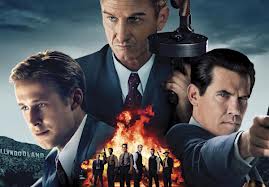 There's something romantic and nostalgic about the 40's and 50's.  Maybe it's the attire.  Or maybe it's the music and they way they danced.  Or maybe it's the decor.  Or maybe, just maybe, it's all of that wrapped into one.  I love watching movies placed in that time period.  "L.A. Confidential" was a gangster-cop movie set during that same time period.  This was one of my top 100 movies of all time.  It was smart, creative, and kept you thinking throughout the movie.  Herein lies the difference between the two movies.  While "Gangster Squad" was supposed to be based on a true story and characters, it became just another "shoot 'em up" movie.  It lacked thought and creativity.  It followed a very straight line formula starting at A and predictably running through to Z. 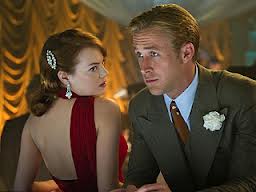 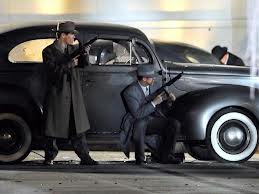 I had hopes for this movie.  (I call Chicago my home, after all, and the Mob is always a topic of conversation regarding its history.)  I loved this all-star cast and the topic as well as the time period.  The basis of the movie was Mob vs. LA Cops and cleaning up their City of Angels.  Sean Penn most recently seen in "This Must Be the Place," has once again transformed himself into a believably different character:  Mob leader Mickey Cohen.  Sgt. Jerry Wooters (Ryan Gosling) and Sgt. John O'Mara (Josh Brolin) join forces in the police squad under the direction of their Police Chief Parker played by Nick Nolte.  We saw Emma Stone (Grace) as the familiar love interest of Gosling's character.  Like I said, an impressive cast.  But the cast wasn't enough to make it worth my while to spend $5.00 for the matinee.  (Yes, I said $5.  One of the perks of living outside the city limits!) 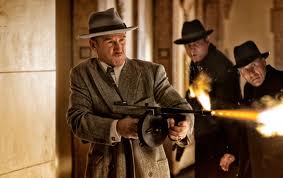 The beginning of the movie is disturbingly violent.  There are a few other parts that I think were thrown in there to show the special effects crew's skills.  Yay.  As the Gangster Squad assembled with 5 police officers, all with different talents, we watched as they tried to take down the increasingly powerful mob boss, Mickey Cohen.  Lots of machine guns, and obviously lots of shooting.  These shooting scenes really weren't too disturbing as they were played out over and over again, just in a different venue.  Blah, blah, blah.  More shooting.  Machine guns vs. pistols...amazing that the pistols always win.  Anyway, more shooting.  There were a couple of little side stories with O'Mara and his pregnant wife as well as with Wooters and Grace.  Then there was some more shooting.

I think you get the gist of the story.  I think it was pretty well outlined in the trailers for the movie.  If you like a Shoot 'Em Up type of movie taking place in the 40's and 50's, you will be thrilled with this movie.  Or if you're throwing a Gangster themed party and want costume and decoration ideas, check it out!  If you find Emma Stone's red dress, please contact me!  Otherwise, I'd wait for the DVD or skip it all together.  My life would be just as complete without having seen this film, that is unless you find that red dress for me!