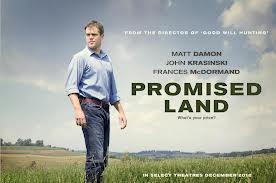 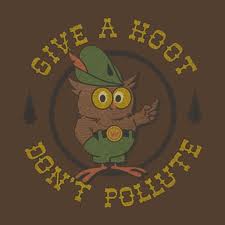 I'll be upfront with you, I care about our planet.  I always have.  From the age of 5, making posters to deliver door to door with a picture of Woodsy The Owl, with the caption, "Give A Hoot, Don't Pollute," to fighting IDOT and Illinois' then Secretary of State George Ryan building a bridge over the Kankakee River (we won!), I want the earth to be safe and clean.  That's why this movie initially intrigued me.  The general story line was a natural gas company's two employees went into a small, struggling farming community rich with natural gas to lease owners' property as cheaply as they can.  What the community was unaware of was the possible risks involved in letting the company come in and utilize a technique called fracking to obtain the gas.  But are promises of wealth and a booming local economy rich with good schools worth the possible outcome of a dead land wrought with health risks? 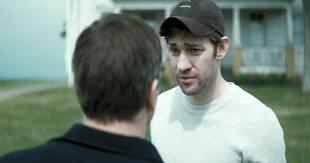 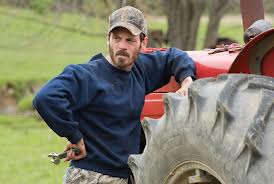 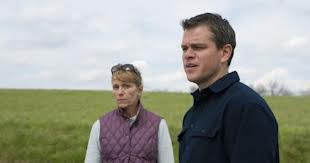 Steve Butler (Matt Damon) and Sue Thomason (Frances McDormand) were the two Global employees who took on the sales pitch to lease the land from the owners.  Their smooth sales pitch and repetitive smarmy lines easily duped the residents until Frank Yates (Hal Holbrook) helped to educate not just the residents in the community, but also Butler about what the true risks really were.   Environmentalist Dustin Noble (John Krasinski) then came in to fight the big company with vengeance.  That was the basic premise of the movie.  Of course, there's a little smoldering of a love story with Butler and Alice (Rosemarie DeWitt) to round out the story.  Although at times the story became a little preachy and definitely geared toward us environmentalists, it allowed you to see both sides of the story as well.  It also allowed you to see how strong a large corporation can be and possibly what lengths it will go to in order to get what it wants. 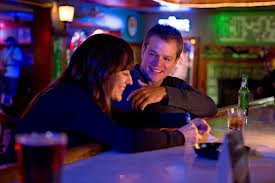 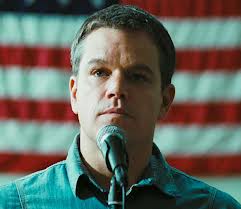 Damon, Krasinski, McDormand, and DeWitt were all their usual talented selves; perfectly portraying their characters at hand.  The story, although somewhat predictable, did have some interesting and unexpected twists and turns.  The script was tight and tried to be educational, but with a smattering of humor in it as well.  How true was the story?  Does it truly happen?  I believe it has and literally right in my own back yard.  Topical and relevant are the two words that describe this movie, but if you're not an environmental proponent, it might be a bit too preachy.