Once again, I found myself breaking a sweat and running UP the mountain to the Egyptian Theatre to hear the ever-intriguing and charming Robert Redford give his Preamble to the Sundance Festivities. With my flight landing 25 minutes late, it was all I could do to at least catch a glimpse and a few profound words uttered from the founder of Sundance. It was worth every drop of sweat, although the people next to me might not have agreed!

Mr. Redford reiterated for the press in the audience how he first began this ever-growing film festival. As Sundance first started as a Lab type experience, Redford had a dream of making it into so much more. He wanted to have films shown not for their commercial value but for their diversity. So many discouraged him, telling him no one would come and that he had no way to market his films. My, oh my, were those naysayers wrong! Apparently, as my idol stated, "Diversity has proven to be commercial and we are still here!" So true. Sundance gives filmmakers a platform on which to express their thoughts and show their creativity in ways that Hollywood might not allow.

There was also much ado about certain parties not wanting Utah to back Sundance Film Festival in a financial manner as they deemed it to be not a family atmosphere of movies. You see, apparently there are movies about...are you ready for this???...movies about...now say this quietly...s-e-x. Yep. It's true. There are movies this year that deal with sexual issues, gay sex, porn, and middle age women still having a libido. It's all true! (Insert gasp here!) Mr. Redford's response was nothing less than you would expect. Everyone has a choice. See it or don't see it; you choose. And there's this thing called the constitution as well...something about freedom of speech perhaps?

Once again, a wonderful press conference by one of the most philanthropic artists I can think of. Someone who is grounded and accessible and wants to make things better in his world and for those who will most certainly come after him. Sundance is a unique playground on which to experiment, push the limits and the envelope and discover what is important to you. Yes, the sweat and the welcoming home to the condo which had been broken into was worth seeing and hearing Mr. Redford. By the way, the Park City Police Department is a wonderful group doing a great job. I thank them for their caring and concern. And thank you to SHABU Restaurant for treating me like royalty after a rough start to my day. Yes, I still love Park City! 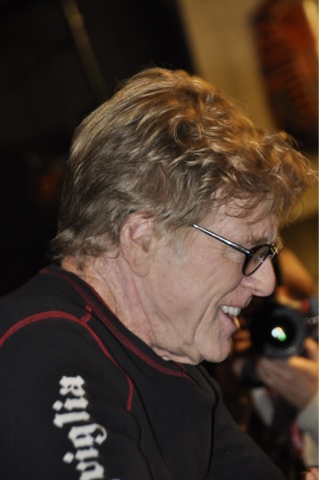