A DARK TRUTH HONESTLY SHOULD BE SKIPPED by Pamela Powell 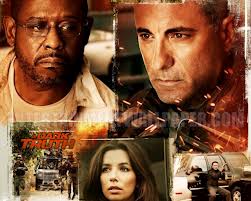 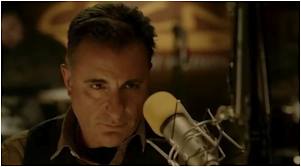 * CONTAINS SPOILERS!*
I've avoided writing this review.  I saw it a while ago, but all I wanted to do is write "skip it" and be done.  However, that wouldn't be fair so I will sit here and take up a few more gigs or bytes or whatever I use up in memory in order to review A DARK TRUTH.  The main cast most certainly was a talented one.  Andy Garcia from one of my favorite quirky indie comedies, CITY ISLAND and Forest Whitaker who I first noted in THE CRYING GAME and want to just give a great big hug to if I ever saw him, were two of the lead roles.  The lead female role played by Deborah Kara Unger was perfectly cast as the wealthy socialite.  I was initially so taken aback by the amount of plastic surgery that was evident due to the lack of facial expressions that I wondered why they cast her in that role.  But it did fit, if you think about it.  Then the adorable Eva Longoria sans mega make-up who was even more adorable with the make up.  So the cast was fine.  The story and direction, I am guessing, were the HUGE missing pieces of the puzzle.  Before I start with that, let me give you a quick synopsis of the movie. 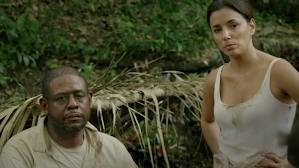 A wealthy brother and sister team, Bruce and Morgan Swinton (Kim Coates, Deborah Kara Unger) owned a powerful corporation for water filtration around the world.  Andy Garcia played Jack Begosian, former CIA agent turned radio personality who hosted a political talk show late at night.  (Note to self...try to master the voice he used on the air tomorrow.)  As the company's overseas operations involved South American military who gunned down innocent civilians just for being,  Morgan Swinton dropped her luncheons and fundraisers and began to investigate the situation utilizing the skills of Jack Begosian, former high level CIA Operative.  Please insert more killing here.  Also very graphic killing. OH!  And heads being blown off.  And some more killing.  Let's throw in some disturbing killing of children, a suicide, and some execution style killing just to make sure all styles of killing are covered. 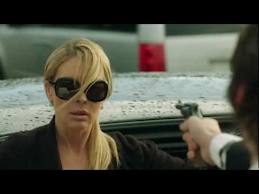 I may have spoiled it for you, but truly that was all there was to this movie.  Such a predictable story line: Big bad powerful company wants profits; fight for what's right; story ends.  I'll let you guess where it went.  Now how could Andy Garcia be unappealing in a movie?  Well, for as little as Unger's face moved, Andy's voice stayed monotone throughout.  No emotion.  No feeling.  Now I know there are Botox injections for the voice, but that's a totally different reason than for the smile lines.  Forest Whitaker and the rest of the cast just didn't give me a reason to care.  That, I believe, was due to the predictably boring script (unless you love watching LOTS of killing) and unclear direction.  The story unfolded, but I just didn't care.  So many characters, so little screen time for anything meaningful other than Garcia's character telling his audience about his view on politics and life's meaning.  This part of the movie started to lull me to sleep and I almost spilled my wine!

That's it.  That's all I've got for you about this movie.  Poor script, lots of killing, lots of blood with special effects, lots of plastic surgery on 2 of the 3 main females, and lots of preaching.  Predictable preaching.  Did I mention the killing and the violence?  This made QT look like a G-Rated filmmaker.  Yes, I'm exaggerating here, but you get my drift, don't you?