WRAPPING UP SUNDANCE by Pamela Powell 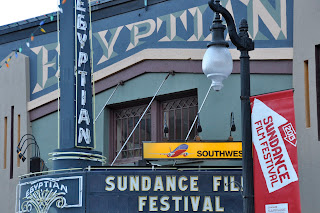 Although the 2013 Sundance Film Festival still has 5 days to go, yesterday was my final day in Park City.  I've got about 13 movie reviews to write along with some pretty amazing interviews to share.  Until those are finished,  I thought I would give you my highlights of the festival so far.


NO starring Gael Garcia Bernal was a standout at this festival.  Replicating a documentary, this film told the story of the vote to oust Pinochet in 1980's Chile "election."  An ad executive risked life and family to help others feel comfortable to vote "no."

SIGHTSEERS was a dark and twisted, unbelievably funny movie about a young couple who tour the English countryside to see the famed Ribblehead Viaduct and the Pencil Museum.  As things go awry, we see the couple show their true personalities...not always a good thing!  This rather shockingly gory film was punctuated with extreme humor!

ESCAPE FROM TOMORROW was my kind of Disney World...a horror flick!  Filmed in black and white, a family of 4 discover that Disney isn't all happiness and smiles!

JOSEPHINE AND THE COCKROACH was a short, beautiful and touching love story melding human characters with CGI perfectly.  This film, devoid of dialogue, spoke volumes with expressions and beautiful music.

BREATHE IN took my breath away.  This deftly directed film with a clear and creative script resulted in a beautiful story.  The musical component took this wonderful movie to an even higher level.

VIPAKA, a psychological thriller, could also be thrown into the horror flick genre.  Although a bit gruesome, Forest Whitaker was an absolute joy to watch in his perfectly portrayed performance of a man struggling with a psychological disorder.

MY NAME IS FAITH should be viewed by anyone in the school system and by anyone who has adopted or knows of a child adopted into a family.  Addressing Attachment Disorder utilizing the story of a struggling child named Faith and her loving parents gave a new perspective on the violence we have in society today.

A TEACHER's story line has been told before, but not in this way.  We watch through the eyes of a young English teacher, the psychological battle she fights.  Quite provocative in nature, naturally, but enlightening from this perspective.

BEFORE MIDNIGHT is the third in a trilogy of movies thus far.  After "Before Sunrise," and "Before Sunset" we meet up with Jesse and Celine who are now in their 40's having been together for many years.  This true-to-life conversational film was hysterical in parts and completely relatable in every aspect.


MUSCLE SHOALS promises to be a wonderful documentary about music legends such as Etta James,
Aretha Franklin, Paul Simon, Bob Dylan and many, many more.  How did this white man, Rick Hall, who came from complete poverty start a recording studio in the midst of the peak of racial tension and produce such legends?

There are a few films I'd skip such as AFTERNOON DELIGHT, CRYSTAL FAIRY and IL FUTURO.  Although I enjoyed C.O.G., it felt more like a "made for tv movie" than one for the big screen.

Keep checking back for more updates!
Posted by Unknown at 3:05 PM